* The Jets and Canadiens combined for 12 goals at Canada Life Centre Tuesday as Winnipeg earned a first-of-its-kind win in NHL history.

* The League-leading Avalanche became the first team to reach the 40-win mark this season.

* The Maple Leafs and Sabres are set to meet for the final time before they go head-to-head outdoors in Hamilton for the 2022 Tim Hortons NHL Heritage Classic (Sunday, March 13 at 4 p.m. ET; TNT, SN, TVAS, NHL LIVE).

JETS OUTLAST CANADIENS IN BACK-AND-FORTH, HIGH-SCORING AFFAIR
After the Jets opened up a 4-0 lead within the first 10 minutes of the game and Josh Anderson’s first career NHL hat trick helped the Canadiens draw even, Mark Scheifele (2-1—3) and Pierre-Luc Dubois (1-2—3) accounted for two of four unanswered goals as Winnipeg defeated Montreal and became the eighth team in the past week to score at least seven times in a contest.

* The Jets and Canadiens became the third set of teams to combine for seven-plus goals in the first period of a game this season, joining the Sharks and Penguins (7 on Jan. 2) as well as the Avalanche and Flyers (7 on Dec. 6, 2021).

* Andre Burakovsky (1-1—2), Gabriel Landeskog and Erik Johnson accounted for Colorado’s three third-period goals as the Avalanche became the first team this season to record 40 wins and tied the Red Wings in 2007-08 and 1995-96 for the second-fewest games to reach the mark in NHL history (54 GP). The only team to require fewer contests was the Capitals in 2015-16 (53 GP).

* Andrew Mangiapane scored his second straight game-winning goal as Calgary swept its home-and-home set with Minnesota, outscoring the Wild 12-4 across the two contests. Mangiapane (21-5—26 in 29 GP) scored his 21st road goal of the season and trails only Oilers forward Leon Draisaitl (who also tallied as a visitor Tuesday) for the most in the NHL.

* Lucas Raymond scored his second overtime goal of the season (also Nov. 27, 2021) as the Red Wings, who also received a tying tally by Dylan Larkin with 3:10 remaining in regulation, rallied past the Hurricanes at Little Caesars Arena. Moritz Seider, with two overtime goals of his own this season (Nov. 6 & Dec. 4, 2021), assisted on the winner to extend his point streak to seven games (1-10—11) – that’s the longest by a rookie defenseman in franchise history.

LAINE LIGHTING LAMP (AGAIN) FEATURED IN LATEST #NHLSTATS: LIVE UPDATES
The Tuesday edition of #NHLStats: Live Updates was highlighted by Columbus forward Patrik Laine (1-1—2) continuing his hot streak as the Blue Jackets (28-25-1, 57 points) moved within eight points of the idle Capitals (28-18-9, 65 points), who occupy the final Wild Card spot in the Eastern Conference. Laine (14-7—21 in 13 GP) has scored 14 goals since Jan. 30 – that’s the most among all players over that span.

NHL AND NHLPA TO CELEBRATE GENDER EQUALITY MONTH
Throughout March, the NHL, NHLPA and entire hockey community will celebrate inspiring stories as part of Gender Equality Month to amplify those shaping the sport today and moving the game forward for the next generation.

* ICYMI: Amalie Benjamin (NHL.com) profiles Lindsay Artkin, president of the NHL Coaches Association, who has helped rebuild the association and is working to create greater opportunities for women in the hockey coaching community with mentorship and leadership programs. Click here to read the full story.

Wednesday’s four-game slate features the final head-to-head game between Toronto and Buffalo before the clubs meet outdoors in the 2022 Tim Hortons NHL Heritage Classic in Hamilton, Ont. Maple Leafs forward Mitchell Marner is set to skate in the 400th game of his NHL career – he was named the NHL’s First Star of the Month for February, leading a trio that included Flames goaltender Jacob Markstrom (Second Star) as well as Blue Jackets forward Patrik Laine (Third Star).

. . . WITH TWO NHL ON TNT GAMES ALSO FEATURED WEDNESDAY
Wednesday’s schedule also includes an NHL on TNT doubleheader, with the Blues-Rangers meeting at Madison Square Garden and the Predators-Kraken closing out their season series at Climate Pledge Arena. TNT studio analyst Wayne Gretzky – who tops countless all-time NHL lists – has significant ties to both St. Louis and New York, while Nashville general manager David Poile – the winningest GM in League history – has a noteworthy family connection to the history of pro hockey in Seattle:

* Gretzky played 18 regular-season games and 13 playoff contests with the Blues in 1995-96 before joining the Rangers for the final three seasons of his NHL career. He was one of seven future Hockey Hall of Famers to appear in at least one game for St. Louis in 1995-96 (also Glenn Anderson, Grant Fuhr, Dale Hawerchuk, Brett Hull, Al MacInnis & Chris Pronger).

* In 1963, the San Francisco Seals defeated the Seattle Totems during the Western Hockey League final to win the Lester Patrick Cup. The head coach and general manager of the Seals at the time was Poile’s father, Bud. 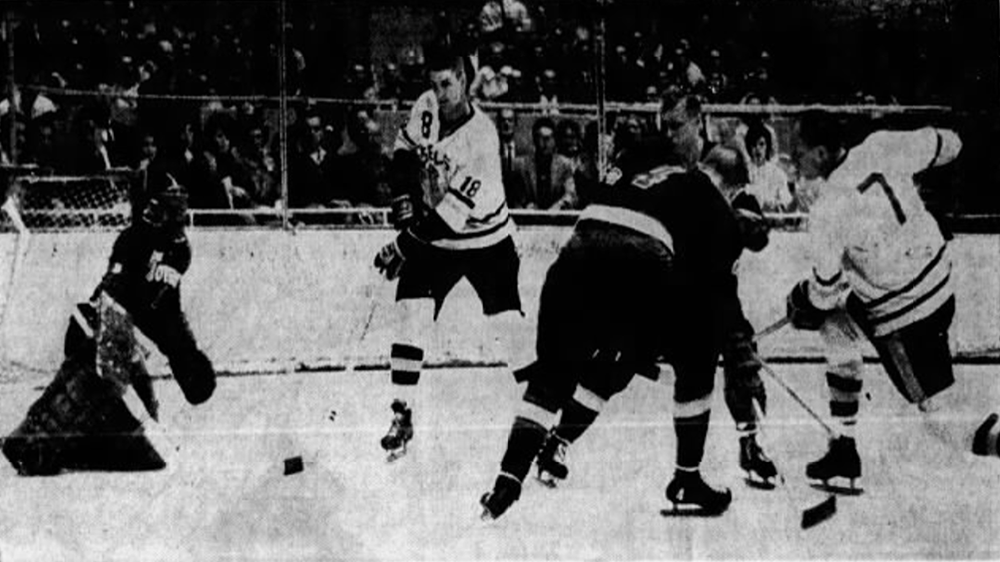 Orland Kurtenbach (pictured with the puck above) scored the overtime winner in Game 7 of the 1963 WHL final as the Seals rallied from a 3-1 series deficit to defeat the Totems. Kurtenbach and the elder Poile would reunite seven years later – Poile, who became general manager of the Canucks, picked Kurtenbach in the 1970 Expansion Draft and named him team captain ahead of the franchise’s inaugural NHL season.