COLUMBUS, OHIO – The Columbus Blue Jackets announced Cincinnati-based Grippo’s as the Official Potato Chip Partner for the franchise today. The snack food company will serve as the Presenting Partner of Overtime and will be known in-game as “Crunch Time.” 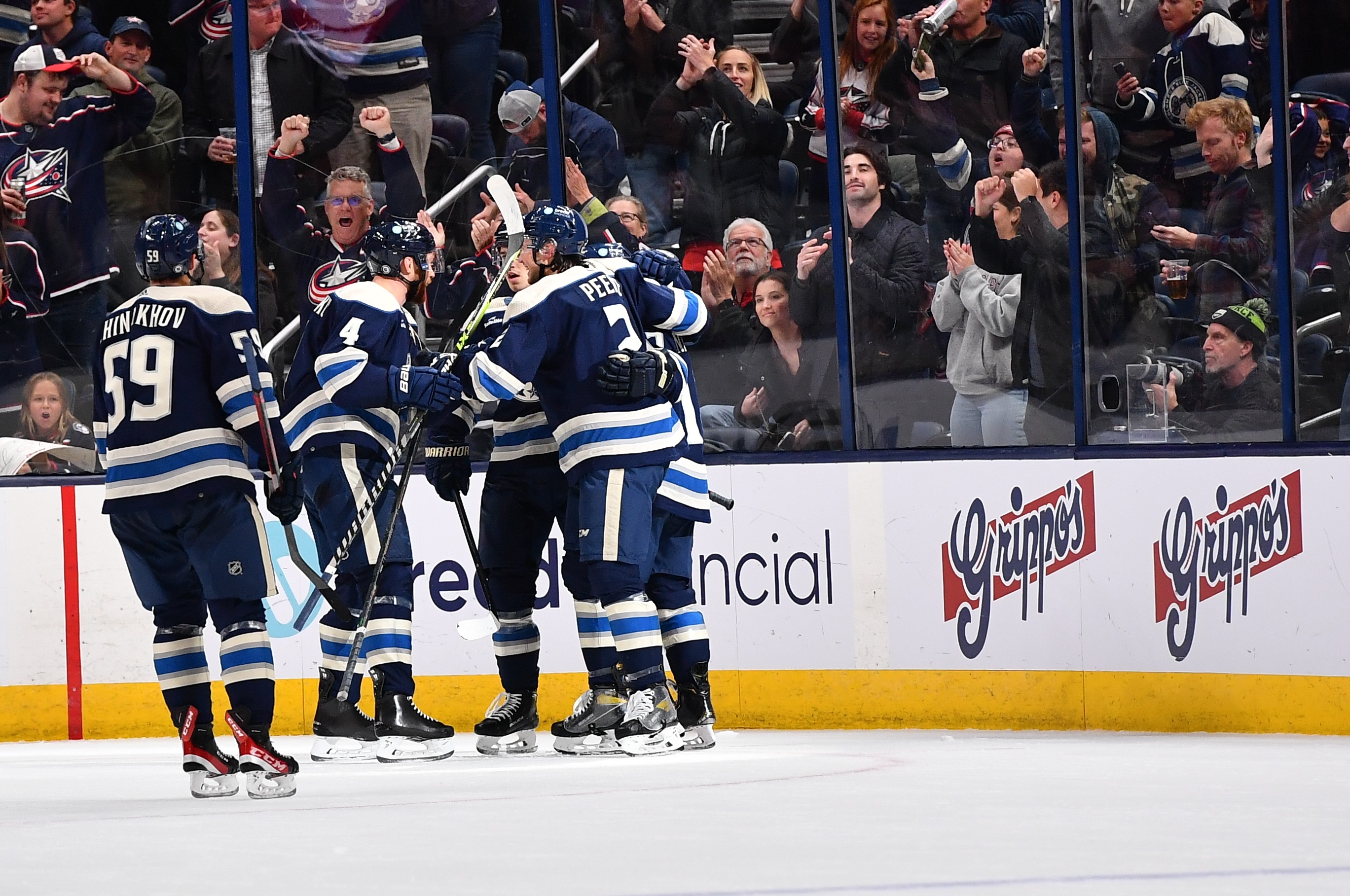 The salty snacks will be available during Blue Jackets games as well as all shows and events in Nationwide Arena thanks to the Blue Jackets’ food and beverage provider, Delaware North Company. As part of the partnership, Grippo’s will also be available at all OhioHealth Chiller Rinks locations.

“The Blue Jackets are very excited to be able to offer a variety of Grippo’s chips to the Fifth Line and hockey fans through our various entities and partnerships. We are thrilled for the Ohio-based potato chip to align with us in an official capacity,” said Blue Jackets Vice President of Corporate Partnerships Ryan Shirk.

“Grippo’s is thrilled to expand our partnerships to include the Columbus Blue Jackets. The Blue Jackets have an extremely loyal fan base as does Grippo’s. We look forward to the combined synergy of the organizations,” said Grippo’s President Teri Baker.

The Blue Jackets return to action tomorrow when they play the New York Islanders at UBS Arena. Game time is 7:30 p.m. ET. Live coverage on Bally Sports Ohio begins with the Blue Jackets Live pre-game show starting at 6 p.m. The game may also be heard on the Blue Jackets Radio Network, including Sports Radio 97.1 The Fan in Columbus, and online at BlueJackets.com.

Single game tickets for all home games played at Nationwide Arena during the 2022-23 season are on sale now.  Full and partial season tickets for the Blue Jackets’ 2022-23 campaign are currently available for purchase.  Information on all ticketing options can be obtained by calling (614) 246-3350 or visiting BlueJackets.com/ticketplans.

Catching Up With Ohio State Men’s Basketball: Indiana puts Buckeyes away with late first half run, 86-70

After a 30-year hiatus, Loyola Rambers and Dayton Flyers hookup in tonight’s 9 PM A-10 Contest

Cindy Williams aka Shirley Feeney on LaVerne & Shirley dies at 75

Hockey World mourns the loss of Bobby Hull at age 84

IndyCar News: What To Look For Heading into The Thermal Club Open Test

Ohio Bobcats Men’s Basketball News: Heads to Akron for Matchup with the Zips

Buckeyes Take on Hoosiers Tonight at 8:00

Blue Jackets stay in the Province of Alberta, playing at Edmonton tonight, 9:30 PM

NFL News: What To Look For – Conference Championships

Saddled with one of the worst teams in the Horizon League at 2-19, Green Bay Phoenix fire Will Ryan before season ends

NFL Week 20 News: What To Look For – Divisional Playoffs

#8 Xavier back home for 12 Noon Matchup with Georgetown

Catching up with Ohio State Women’s Basketball: Goes to 18-0 with win at Nebraska, 76-67

Loyola Marymount pulls off the upset of the year in college basketball, winning at #6 Gonzaga in 100th All-Time Meeting

Iowa at Ohio State Promotions for this Saturday’s Game

#12 Xavier pushes winning streak to 11 after getting past #25 Marquette, 80-76; Musketeers have 6 in double figures

Good News! Safety Lathan Ransom will return to Buckeyes in 2023

Buckeyes QB C.J. Stroud Thanks Fans as he heads to the NFL Draft

Catching Up with Miami Basketball: RedHawks hold off Buffalo, 91-80

Catching Up Xavier Musketeers Basketball: Behind Freemantle’s 29 No. 18 Men’s Basketball Moves to 5-0 in BIG EAST Play with 88-80 Win at Villanova

Catching up with UC Basketball: Bearcats Grind Out Tough Road Win at SMU, 54-52

Catching Up with UC Basketball: Nolley Leads Cincinnati Past ECU, 83-55

ICYMI, Gophers beat Buckeyes in Columbus behind Garcia and Cooper

NFL News: NFL and FedEx Announce Candidates for the 20th-Annual FedEx Air and Ground® NFL Players of the Year

Dayton Flyers Men’s Basketball Back Home To Take On VCU Tonight at 9:00

#12/11 Xavier Musketeers back in action tonight hosting Creighton at 7:00

Lairy and Mirambeaux led RedHawks to 91-80 win over Buffalo

Dayton pulls out to early lead, Cruises To 82-58 Win At Fordham

Actor Adam Rich, aka Nicholas Bradford of “Eight Is Enough” Fame, dead at 54

Cincinnati Bearcats Men’s Basketball has a tall task in hosting No. 2 Houston Today at 3 PM

NFL Week 18 Preview, Championship of the AFC South up for grabs tonight at 8:15 as Titans visit Jaguars

NFL News: WEEK 17 BUFFALO-CINCINNATI GAME WILL NOT BE RESUMED

Alex Ovechkin, Capitals too much for Blue Jackets in 6-2 loss

Catching up with Wright State Men’s Basketball: Calvin’s 31 points not enough in loss at NKU

Buffalo Bills News: News on Damar Hamlin and his family’s statement on outpour of support

NFL Week 17 ends with two AFC Heavyweights against each other, Bills at the Bengals on Monday Night Football, 8:30 PM

HAPPY NEW YEAR’S from Megasportsnews.com! Have a Prosperous 2023

No. 22 Xavier Hosts No. 2 UConn In BIG EAST Showdown Today at Noon

Dayton Flyers Men’s Basketball Travels To The Charlotte, NC area to take on Davidson this afternoon at 2:00

Broadcast Journalist/TV Personality Barbara Walters of 20/20 and The View, dead at 93

BOWL GAME PREVIEW: Clemson, not in CFP this year, still gets a good bowl game playing Tennessee in the Orange; Tigers Game Notes

First Bowl Game in 14 years has Kansas Jayhawks Set to Take on Arkansas Razorbacks in the AutoZone Liberty Bowl Today at 5:30 p.m.

For only the 2nd time in 61 years, New Mexico State to Meet Bowling Green in Quick Lane Bowl

Merry Christmas to all from the Staff & Management of Megasportsnews.com!

NFL News: NFL AND GOOGLE PARTNER TO BRING FANS THE NEXT GENERATION OF NFL SUNDAY TICKET ON YOUTUBE TV AND YOUTUBE PRIMETIME CHANNELS

NFL News: Statement from Commissioner Roger Goodell on the Passing of Franco Harris

NFL News: The Starting 11 — ‘Tis the season for miracles in the NFL

Wright State creeping along at 6-6 getting ready for Horizon League play where they always excel; Postgame press conference with head coach Scott Nagy after 111-59 win over UNOH

Say it ain’t so! 50th anniversary of “The Immaculate Conception” coming up this Saturday and Franco Harris dead at 72

NFL Week 14 Game Preview, 4:05 PM: Chiefs try to get back on track at the Broncos

Dayton Flyers News: After lopsided loss at Virginia Tech on Wednesday, 5-5 Back At UD Arena Saturday To Face UNC Asheville 6-3

News from The White House: Background Press Call on the Release of Brittney Griner

Catching up with The Bengals: Cincinnati 20 Tennessee Titans 16

The Search Is Over! COLUMBUS CREW NAMES WILFRIED NANCY AS HEAD COACH

NFL News: NFL PLAYERS SHOWCASE THEIR PASSION FOR CAUSES BEYOND THE GAME IN SEVENTH SEASON OF MY CAUSE MY CLEATS

Country Singer Jake Flint dies hours after his wedding; he was 37

DE J.T. Tuimoloau faces the media after #3 Michigan beats #2 Ohio State for the second year in a row, 45-23