* Connor McDavid started the 2022-23 campaign with a bang, surpassing the 700-point mark after a four-point outing, recording the first hat trick of the season and leading his club to a three-goal comeback win.

* After raising their Stanley Cup banner into the rafters, the Avalanche improved the defending champions’ record in season openers to 60-26-16 (102 GP) in a contest that featured six power-play goals.

* For the second time in as many days and eighth time in NHL history, a season-opening game was decided by a go-ahead goal in the final 30 seconds of regulation as Josh Anderson capped a frenetic finish in the 20th all-time head-to-head season opener between the Canadiens and Maple Leafs.

* Thursday is set to feature several players debuting with new teams as well as a trio of teammates embarking on their 17th NHL season together.

McDAVID HITS 700-POINT MARK WITH SEASON-OPENING HAT TRICK
With Edmonton trailing 3-0 midway through the second period, Oilers captain Connor McDavid factored on four of his club’s five consecutive goals, capping off the night with the NHL’s first hat trick of the 2022-23 season. McDavid (3-1—4) boosted his career totals to 242-459—701 (488 GP) and became the fastest active player to reach the 700-point milestone. 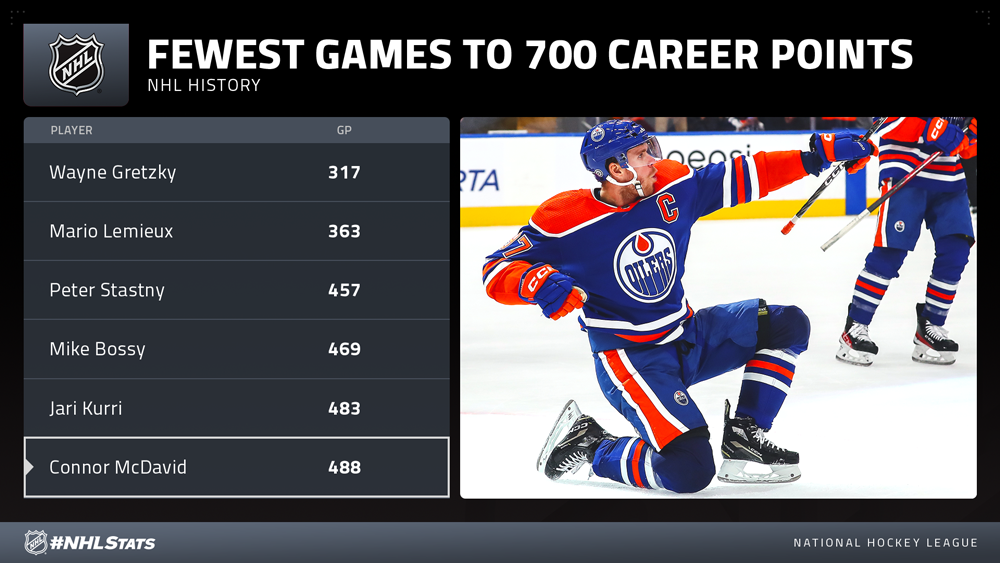 * The Oilers overcame a three-goal deficit to win a season-opening game for the first time in franchise history. Edmonton became just the ninth club in NHL history to do so and the first since Anaheim on Oct. 5, 2017. Coincidentally, the Ducks overcame a 3-1 deficit Wednesday night to record their second-ever multi-goal comeback win in a season opener.

SPECIAL TEAMS PROPEL AVALANCHE TO VICTORY ON SPECIAL BANNER-RAISING NIGHT
After a banner-raising ceremony and an “All The Small Things” sing-along led by Mark Hoppus from Blink-182, Mikko Rantanen (0-4—4) led the Avalanche to a sound victory factoring on four of the game’s six power-play goals. The contest fell one shy of the most power-play markers in a season opener (since 1933-34 when goals by type was officially tracked) established by the Bruins (3) and Canadiens (4) on Oct. 9, 1975.

* Rantanen matched Peter Stastny (3x) and Dale Hunter for the second-most points by an Avalanche/Nordiques player in a season-opening game, trailing only Michel Goulet (1-4—5 on Oct. 4, 1983). Stastny, Hunter and Goulet all achieved the feat with Quebec.

CANADIENS CLAIM VICTORY IN SEASON OPENER WITH TWO LATE GO-AHEAD GOALS
After Cole Caufield scored twice to help his team erase a 1-0 and 2-1 deficit, Sean Monahan and Josh Anderson both tallied go-ahead goals in the final 2:30 of regulation to lift the Canadiens past their Original Six-rival Maple Leafs in front of a roaring crowd during their season opener at Bell Centre. 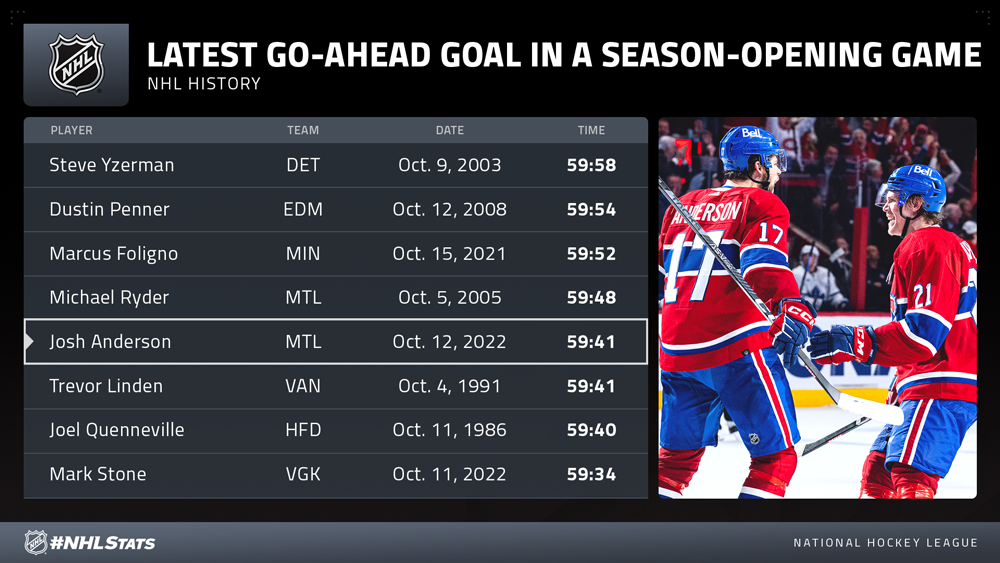 * Caufield (21 years, 283 days) became the third-youngest player in Canadiens history to score multiple goals in a season opener, behind only Bernie Geoffrion (20 years, 237 days on Oct. 11, 1951) and Aurel Joliat (21 years, 109 days on Dec. 16, 1922). Caufield required 31 contests to record his second goal last season and went on to finish the campaign atop his club in goals. When he entered Bell Centre today, Caufield chose not to answer the question, “Who will score the Canadien’s first goal of the season?”

PASTRNAK POWERS BRUINS TO VICTORY IN SEASON OPENER
David Pastrnak (1-3—4) factored on each of Boston’s first four goals and concluded the night one shy of the franchise mark for points in a season opener while David Krejci (1-2—3) made an immediate impact in his first NHL game in nearly 500 days by recording his 100th career multi-assist outing as the Bruins skated to their first win of the season. 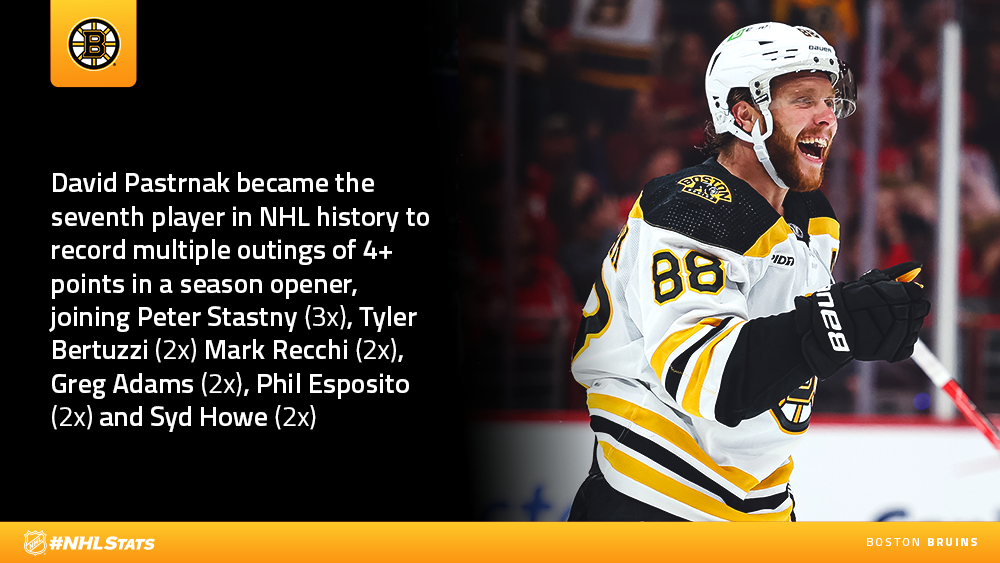 BIG NAME DEBUTS ON TAP FOR THURSDAY
Several notable players are set to debut with new clubs as 20 teams take to the ice Thursday, including 11 contesting a season-opening game. 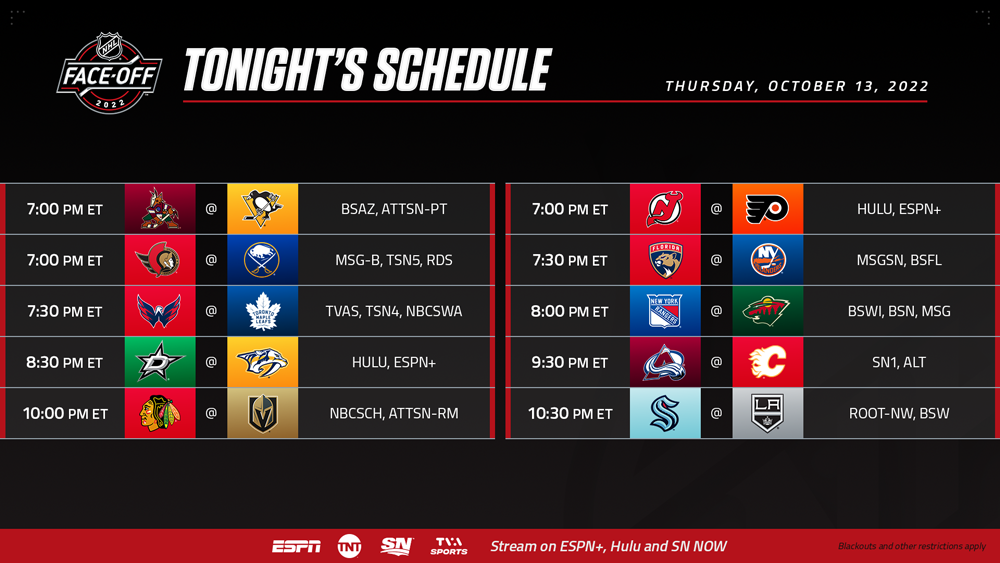 * Alex DeBrincat and Claude Giroux will contest their first game with Ottawa as the Senators visit the Sabres at KeyBank Center. DeBrincat was one of 17 40-goal scorers last season and can become the second player in franchise history to record as many during his first campaign with Ottawa, joining Dany Heatley (50 in 2005-06).

* Matthew Tkachuk will make his Panthers premiere when they take on the Islanders at UBS Arena. Tkachuk begins his quest for a second consecutive 100-point season after posting 104 with Calgary last year – he can join Jonathan Huberdeau (who was sent to the Flames in the blockbuster trade involving Tkachuk) as the second player to reach the mark with Florida.

* Huberdeau and Stanley Cup champion Nazem Kadri will make their team debut during the Flames’ season opener against the Avalanche at Scotiabank Saddledome. Huberdeau led the League with 85 assists last season and can become the second player to record 80-plus in a campaign with Calgary, joining Kent Nilsson (82 in 1980-81). 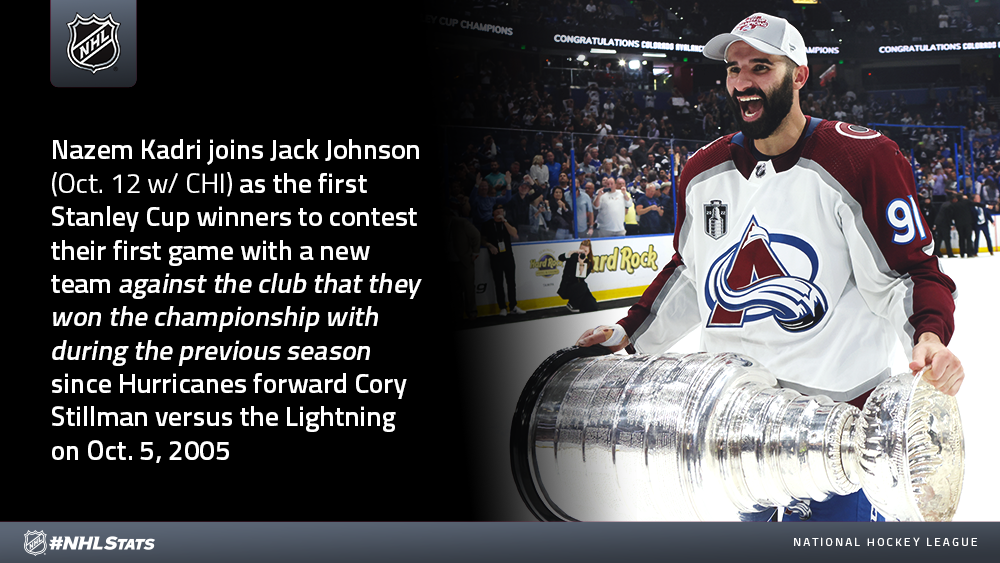 PREDATORS, POILE CLOSE IN ON WIN MILESTONE; PENS TRIO BACK FOR 17TH SEASON
While Thursday’s slate features plenty of familiar faces in new places, several franchise cornerstones are also involved in the action:

* Pittsburgh veterans Sidney Crosby, Kris Letang and Evgeni Malkin are set to embark on their 17th NHL season together dating to 2006-07, extending the longest such run in League history by a trio of teammates. Kings mainstays Drew Doughty, Anze Kopitar and Jonathan Quick pushed their streak to 15 campaigns Tuesday. 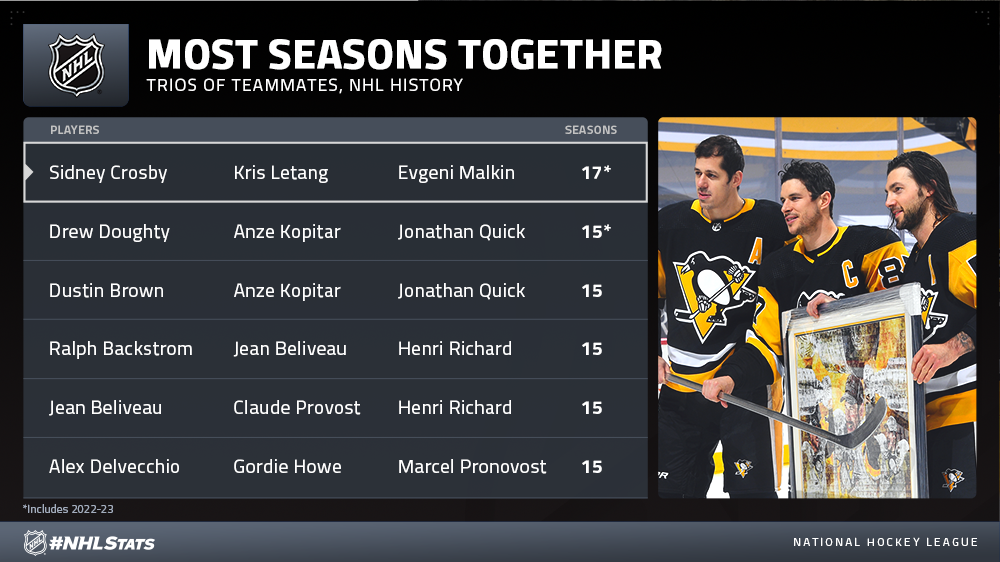 Catching Up With Ohio State Men’s Basketball: Indiana puts Buckeyes away with late first half run, 86-70

After a 30-year hiatus, Loyola Rambers and Dayton Flyers hookup in tonight’s 9 PM A-10 Contest

Cindy Williams aka Shirley Feeney on LaVerne & Shirley dies at 75

Hockey World mourns the loss of Bobby Hull at age 84

IndyCar News: What To Look For Heading into The Thermal Club Open Test

Ohio Bobcats Men’s Basketball News: Heads to Akron for Matchup with the Zips

Buckeyes Take on Hoosiers Tonight at 8:00

Blue Jackets stay in the Province of Alberta, playing at Edmonton tonight, 9:30 PM

NFL News: What To Look For – Conference Championships

Saddled with one of the worst teams in the Horizon League at 2-19, Green Bay Phoenix fire Will Ryan before season ends

NFL Week 20 News: What To Look For – Divisional Playoffs

#8 Xavier back home for 12 Noon Matchup with Georgetown

Catching up with Ohio State Women’s Basketball: Goes to 18-0 with win at Nebraska, 76-67

Loyola Marymount pulls off the upset of the year in college basketball, winning at #6 Gonzaga in 100th All-Time Meeting

Iowa at Ohio State Promotions for this Saturday’s Game

#12 Xavier pushes winning streak to 11 after getting past #25 Marquette, 80-76; Musketeers have 6 in double figures

Good News! Safety Lathan Ransom will return to Buckeyes in 2023

Buckeyes QB C.J. Stroud Thanks Fans as he heads to the NFL Draft

Catching Up with Miami Basketball: RedHawks hold off Buffalo, 91-80

Catching Up Xavier Musketeers Basketball: Behind Freemantle’s 29 No. 18 Men’s Basketball Moves to 5-0 in BIG EAST Play with 88-80 Win at Villanova

Catching up with UC Basketball: Bearcats Grind Out Tough Road Win at SMU, 54-52

Catching Up with UC Basketball: Nolley Leads Cincinnati Past ECU, 83-55

ICYMI, Gophers beat Buckeyes in Columbus behind Garcia and Cooper

NFL News: NFL and FedEx Announce Candidates for the 20th-Annual FedEx Air and Ground® NFL Players of the Year

Dayton Flyers Men’s Basketball Back Home To Take On VCU Tonight at 9:00

#12/11 Xavier Musketeers back in action tonight hosting Creighton at 7:00

Lairy and Mirambeaux led RedHawks to 91-80 win over Buffalo

Dayton pulls out to early lead, Cruises To 82-58 Win At Fordham

Actor Adam Rich, aka Nicholas Bradford of “Eight Is Enough” Fame, dead at 54

Cincinnati Bearcats Men’s Basketball has a tall task in hosting No. 2 Houston Today at 3 PM

NFL Week 18 Preview, Championship of the AFC South up for grabs tonight at 8:15 as Titans visit Jaguars

NFL News: WEEK 17 BUFFALO-CINCINNATI GAME WILL NOT BE RESUMED

Alex Ovechkin, Capitals too much for Blue Jackets in 6-2 loss

Catching up with Wright State Men’s Basketball: Calvin’s 31 points not enough in loss at NKU

Buffalo Bills News: News on Damar Hamlin and his family’s statement on outpour of support

NFL Week 17 ends with two AFC Heavyweights against each other, Bills at the Bengals on Monday Night Football, 8:30 PM

HAPPY NEW YEAR’S from Megasportsnews.com! Have a Prosperous 2023

No. 22 Xavier Hosts No. 2 UConn In BIG EAST Showdown Today at Noon

Dayton Flyers Men’s Basketball Travels To The Charlotte, NC area to take on Davidson this afternoon at 2:00

Broadcast Journalist/TV Personality Barbara Walters of 20/20 and The View, dead at 93

BOWL GAME PREVIEW: Clemson, not in CFP this year, still gets a good bowl game playing Tennessee in the Orange; Tigers Game Notes

First Bowl Game in 14 years has Kansas Jayhawks Set to Take on Arkansas Razorbacks in the AutoZone Liberty Bowl Today at 5:30 p.m.

For only the 2nd time in 61 years, New Mexico State to Meet Bowling Green in Quick Lane Bowl

Merry Christmas to all from the Staff & Management of Megasportsnews.com!

NFL News: NFL AND GOOGLE PARTNER TO BRING FANS THE NEXT GENERATION OF NFL SUNDAY TICKET ON YOUTUBE TV AND YOUTUBE PRIMETIME CHANNELS

NFL News: Statement from Commissioner Roger Goodell on the Passing of Franco Harris

NFL News: The Starting 11 — ‘Tis the season for miracles in the NFL

Wright State creeping along at 6-6 getting ready for Horizon League play where they always excel; Postgame press conference with head coach Scott Nagy after 111-59 win over UNOH

Say it ain’t so! 50th anniversary of “The Immaculate Conception” coming up this Saturday and Franco Harris dead at 72

NFL Week 14 Game Preview, 4:05 PM: Chiefs try to get back on track at the Broncos

Dayton Flyers News: After lopsided loss at Virginia Tech on Wednesday, 5-5 Back At UD Arena Saturday To Face UNC Asheville 6-3

News from The White House: Background Press Call on the Release of Brittney Griner

Catching up with The Bengals: Cincinnati 20 Tennessee Titans 16

The Search Is Over! COLUMBUS CREW NAMES WILFRIED NANCY AS HEAD COACH

NFL News: NFL PLAYERS SHOWCASE THEIR PASSION FOR CAUSES BEYOND THE GAME IN SEVENTH SEASON OF MY CAUSE MY CLEATS