The number of NHL regular-season games contested outside North America will rise to 36 following a back-to-back set between the Sharks and Predators at O2 Arena in Prague, Czechia which will mark the start of the 2022-23 regular season. These contests are part of a four-game 2022 NHL Global Series, which will continue in November when the Blue Jackets and Avalanche face off in regular-season games at Nokia Arena in Tampere, Finland on Friday, Nov. 4 and Saturday, Nov. 5.

* There have been five previous regular-season games played in Czechia, all at O2 Arena in Prague. In the most recent, Travis Konecny scored twice to give the Flyers a 4-3 win on Oct. 4, 2019 in the 2019 NHL Global Series.

* Other notables from the five previous NHL regular-season games played in Prague include: the NHL debut for Steven Stamkos during the 2008 Premiere Series (Oct. 4, 2008 with TBL) and the start of a Stanley Cup-winning season for the Bruins at the 2010 Premiere Series (they split a back-to-back set against PHX on Oct. 9, 2010 and Oct. 10, 2010). 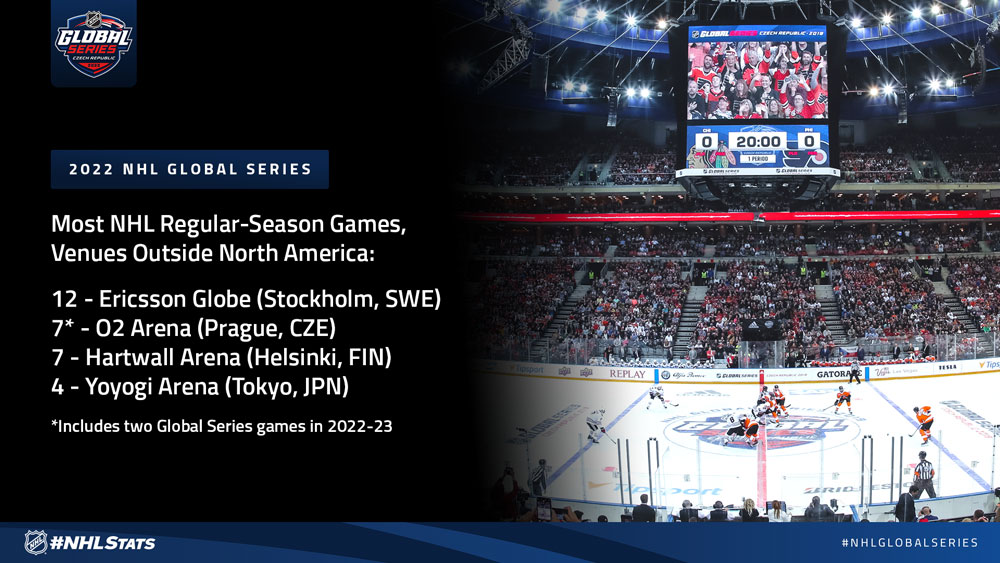 * Many Czech-born players have left their mark on the NHL over the years, including two of the League’s all-time greats: Jaromir Jagr (Kladno) and Dominik Hasek (Pardubice). Jagr, who ranks among the top five on the NHL’s all-time list for goals (4th; 766), assists (5th; 1,155) and points (2nd; 1,921), is a two-time Stanley Cup champion and five-time Art Ross Trophy winner. Hasek, who is also a two-time Stanley Cup winner (2002 & 2008 w/ DET), is the only goaltender to win the Hart Trophy twice and his six Vezina Trophy wins trail only Jacques Plante (7).

* A total of 39 Czech players appeared in an NHL regular-season game in 2021-22 (31 skaters and 8 goaltenders), including a pair of 30-goal scorers in Bruins forward David Pastrnak (40) and Sharks forward Tomas Hertl (30). 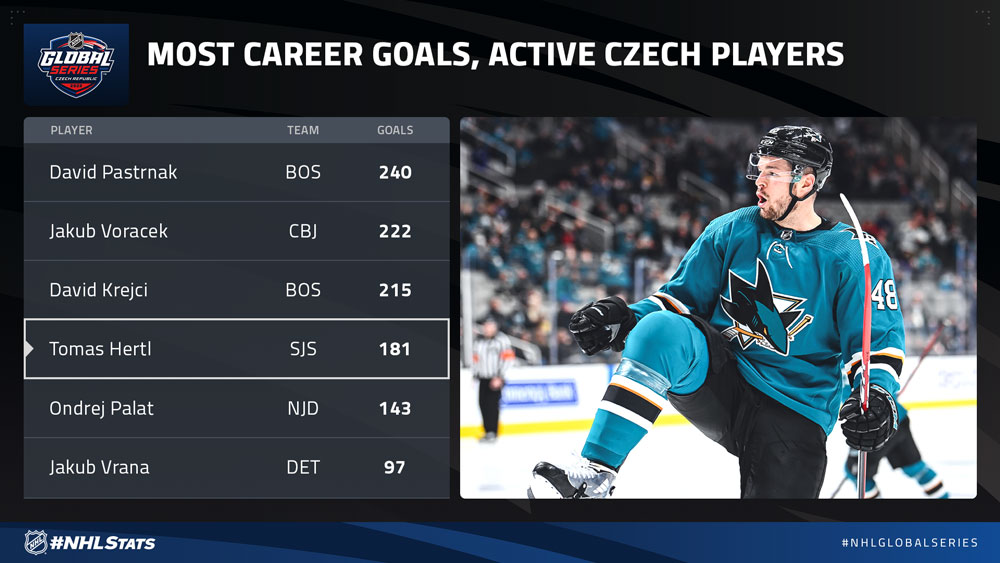 * Logan Couture and Marc-Edouard Vlasic are the only players that skated for San Jose in the 2010 Premiere Series that remain with the team entering the 2022 Global Series. Couture scored the game-winning goal in San Jose’s 3-2 win against Columbus on Oct. 8, 2010 in Stockholm, Sweden and can join Yanni Gourde (2 GWG w/ TBL in 2019 Global Series) as the second player with multiple game-winning goals in regular-season games contested outside North America.

* The Sharks will take on Eisbaren Berlin in Berlin, Germany in a preseason game on Oct. 4. The Sharks currently have one German-born player on their roster – Nico Sturm (Augsburg), who will be skating in his first season with the franchise. Marco Sturm (no relation to Nico), who spent his first eight NHL seasons with the Sharks, ranks top-five among German born-and-trained players in career games (1st; 938), goals (2nd; 242), assists (4th; 245), points (2nd; 487) and game-winning goals (t-1st; 43). Dany Heatley and Walt Tkaczuk, who were born in Germany but listed their nationality as Canadian, are excluded from the lists noted above.

* Vlasic is starting his 17th season with the Sharks, trailing only Marleau (21) for the most seasons played in franchise history.


Nashville Predators
* Two players have recorded multiple points while playing for the Predators in a regular-season game contested outside North America: Scott Walker (1-1—2) and Vitali Yachmenev (1-1—2) in Saitama, Japan on Oct. 6, 2000.

* The only current Nashville player born in Czechia (as of Sept. 7, 2022) is goaltender Tomas Vomacka (Trutnov). Predators captain Roman Josi was born in Bern, Switzerland – approximately an 8.5 hour drive from Prague. The Predators will face his former team, SC Bern, in a preseason game in Bern on Oct. 3. Josi is the only Swiss player in NHL history to reach the 400-assist and 500-point milestones. Nashville forward Nino Niederreiter (Chur) is also from Switzerland. 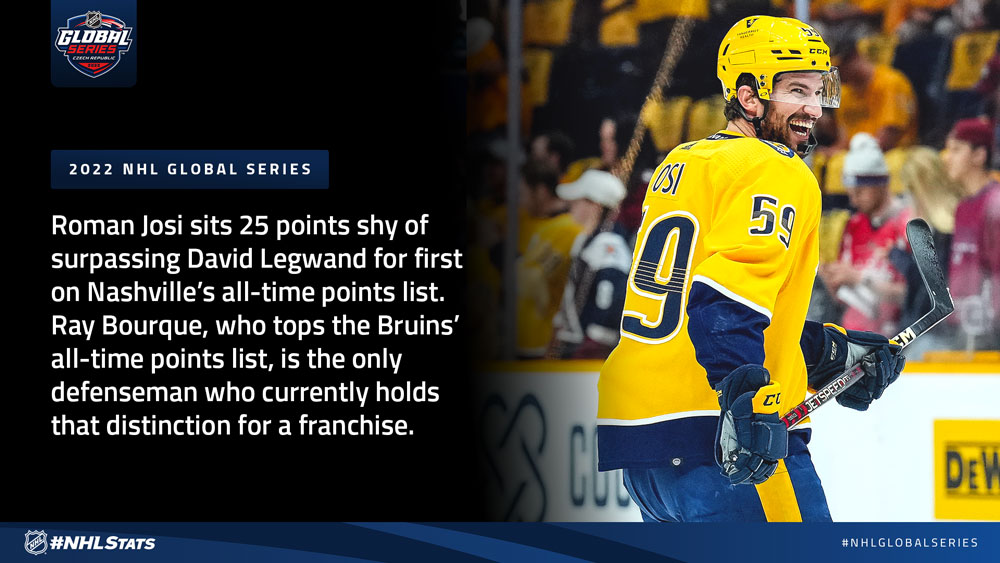 * Former NHL player Martin Erat (Trebic, Czechia) started his NHL career with Nashville and spent parts of 11 seasons with the franchise – he still ranks among the top five in club history for career games played among skaters (4th; 723), goals (4th; 163), assists (3rd; 318) and points (3rd; 481). Erat was traded to the Capitals as part of a package that brought current forward and franchise goals leader Filip Forsberg to Nashville.


Quick Hits:
* The most points by one player in a regular-season game contested outside North America came against the Sharks, when Flames forward Theo Fleury posted 3-2—5 on Oct. 10, 1998 in Tokyo, Japan.

* In addition to Fleury, the only other player to record a hat trick in a regular-season game contested outside North America was Patrik Laine. He scored three times for the Jets in front of his home country fans at Hartwall Arena in Helsinki, Finland on Nov. 1, 2018 as part of the 2018 NHL Global Series. He is expected to return to Finland as part of the 2022 NHL Global Series in November.

* Former Jets teammates Blake Wheeler and Dustin Byfuglien each had three assists in the aforementioned 2018 NHL Global Series game in Helsinki on Nov, 1, 2018, tied for the most assists in a regular-season game contested outside North America.

* The most saves by a goaltender in a regular-season game contested outside North America is 52, by Tomas Vokoun for the Panthers in a 4-3 shootout win against the Blackhawks at Hartwall Arena in Helsinki, Finland on Oct. 2, 2009 as part of the 2009 NHL Premiere Series. Vokoun previously was with Nashville for each of its first eight seasons in the NHL, from 1998-99 to 2006-07.

* Only two goaltenders have posted a shutout in the 34 regular-season games contested outside North America to date: Boston’s Tim Thomas in a 3-0 win against Phoenix on Oct. 10, 2010 in Prague, Czechia and Chicago’s Antti Niemi in a 4-0 win versus Florida on Oct. 3, 2009 in Helsinki, Finland.

Country Singer Jake Flint dies hours after his wedding; he was 37

DE J.T. Tuimoloau faces the media after #3 Michigan beats #2 Ohio State for the second year in a row, 45-23

2022 NCAA Football Conference Championship Weekend: North Texas Out For Revenge With C-USA Title On The Line against UT San Antonio

Eventhough program was struggling and administration behind him, surprisingly David Shaw Steps Down as Stanford Head Football Coach

Despite winning The Fremont Cannon and improving to 5 wins, football coach Marcus Arroyo fired by UNLV

In the Battle of Nevada, UNLV gets the Cannon back after a 2-year hiatus in 27-22 win over Nevada

Xavier Men’s Basketball: Goes Up Against Duke In A Semifinal Of The Phil Knight Legacy

In a Battle of D.C., American Eagles upset Georgetown for the first time in 40 years; Huge Second Half Powers Men’s Basketball

Happy Thanksgiving from The Staff & Management of Megasportsnews.com!

Bengals drive up and down field on Steelers in 37-30 win; QB Joe Burrow

In a thriller, Ohio Men’s Basketball Falls at 20th-Ranked Michigan in OT

#2 Ohio State guts out 43-30 win at pesky Maryland to go to 11-0; looks ahead to next week’s arch-rival showdown against 11-0 Michigan Wolverines

NFL Week 11 Preview, 1 PM, Eagles look to rebound with visit to The Circle City of Indianapolis and the Colts

#2 Buckeyes set for final road game of season at much improved and dangerous Maryland, 3:30 PM

Twins add another bat to lineup; gets Kyle Farmer from cost-cutting Reds

Pirates get bullpen help from Reds with acquisition of Dauri Moreta

Reds get Newman from Pirates, trade Farmer to Twins

BG Falcons regain I-75 Trophy after Ta’ron Keith’s TD catch with 9 seconds to go in 42-35 win at Toledo; game was a classic in a great rivalry

NFL News: The Starting 11 — NFL enjoying its most competitive season in 90 years

NFL News: NFL CELEBRATES NEXUS OF CULTURE AND SPORT UPON RETURN TO MEXICO FOR FINAL INTERNATIONAL GAME OF THE SEASON

Days of our Lives star John Aniston dead at 89

NFL Week 10 Preview: Browns back in action after bye week heading to Miami

NFL Week 10 Preview In Munich, Germany, Seahawks go up against the Buccaneers

After a week of improved Brooklyn Nets play on the court, team removes interim tag from Vacque Vaughn’s name

NFL News: THE NFL CONTINUES ITS COMMITMENT TO THE MILITARY COMMUNITY THROUGH SALUTE TO SERVICE

Flyers In A Three-Way Tie For Second Place In The PFL, travels to Presbyterian this afternoon

After back to back close losses, Miami Redhawks looking to get back on track at Akron

Lower.com Field to serve as the “Home of Soccer in Central Ohio” during 2022 FIFA World Cup

Columbia Lions hosts Yale under the lights tonight at 6:30

Rewind: Another defensive letdown in Jackets 6-3 loss to Arizona

Rewind: Blue Jackets defense and goaltending get hammered in 6-3 loss to Penguins 10/22/2022

Catching Up with the Cincinnati Bengals: WR Ja’Marr Chase meets with media after 30-26 win at Saints

Catching up with the Cincinnati Bengals: QB Joe Burrow meets with media after 30-26 win at the Saints

Burrow, Boyd, Higgins and Chase too much for Falcons in Cincinnati’s 35-17 win

NFL Week 7 Preview: Both Packers (3-3) and Commanders (2-4) are inconsistent; meet today at 1 PM in our Nation’s Capitol

Big Ten Conference Football Players of the Week for Week 7

Blue Jackets looking to get to .500 mark on season as Pittsburgh Penguins visit Columbus tonight

NHL News: Vancouver Canucks off to a slow start at 0-3-1

Blue Jackets back on the ice tonight hosting Nashville

CBJ gets first win of new season, 4-3 in OT over struggling Vancouver Canucks; Zach Werenski one of the key players

Catching Up With LIV Golf September 2022: 4-Peat for 4 Aces GC as they capture Boston event

Catching Up With LIV Golf September 2022: Three-Peat for 4 Aces GC in Boston

Catching Up with LIV Golf from July 2022: 4 ACES GC WINS IN PORTLAND

Bengals led by Burrow, Chase rally in 2nd half to beat Saints, 30-26

NFL Week 6 Preview: Bengals try to get back on track in the Big Easy playing the Saints 1PM

Illinois Fighting Illini Football on the rise; in AP Top 25 first time since 2011

Charles McClelland’s career at UC has been injury-plagued but now one of top rushers; led team to win over USF last Saturday

This Is It! Crew faces Orlando City SC on MLS Decision Day, win or tie gets Columbus into Playoffs

NFL Week 5 Preview: Unbeaten Eagles will have their hands full at Arizona with Tyler Murray and Cardinals

NFL Week 5 Preview: Dolphins try to get back to winning against improved NY Jets

NFL Week 5 Preview: Seahawks travel to The Big Easy to battle the Saints

Looking Back At UC Football: Bearcats air attack too much for Indiana in 45-24 win

NFL News: The Starting 11 — NFL off to its most competitive start ever entering Week 5

NFL WEEK 4 Game Preview for Sunday, October 2, 2022: Patriots a rare visit to Lambeau Field and a date with the Packers

NFL WEEK 4 Game Preview for Sunday, October 2, 2022: A Big 12 Conference feel in Charlotte today as the Cardinals invade the Panthers