After dazzling with his skill, wowing with his smooth skating and compiling more points in one playoff year than all but three defensemen in NHL history, Avalanche defenseman Cale Makar was named the 2022 Conn Smythe Trophy winner. Awarded to “the most valuable player to his team in the playoffs,” Makar was selected the winner in a vote by a panel of the Professional Hockey Writers Association.

* Makar, 23, claimed the Conn Smythe Trophy five days after receiving his first Norris Trophy. He became the third player in NHL history to win both awards in the same season, following Bobby Orr in 1970 (age 22) and 1972 (age 24) along with Nicklas Lidstrom in 2002 (age 32).

* Overall, Makar became the 12th player to claim playoff MVP honors before his 24th birthday and first since Jonathan Toews (22 years, 41 days) with the 2010 Blackhawks.

* Makar’s win marks the 12th time that a defenseman has claimed the Conn Smythe Trophy and second in the past three years after Victor Hedman with the 2020 Lightning. He is the 11th different blueliner named playoff MVP as Bobby Orr won it twice (1970 & 1972).

* Makar made his Stanley Cup Playoffs debut in 2019 just three days after claiming the Hobey Baker Award as the top NCAA player. In a little more than three years since, Makar has had to make space alongside his Hobey Baker Award for the Calder Trophy, Norris Trophy, Stanley Cup and Conn Smythe Trophy – the first player ever to win each of those awards at any point of his career. 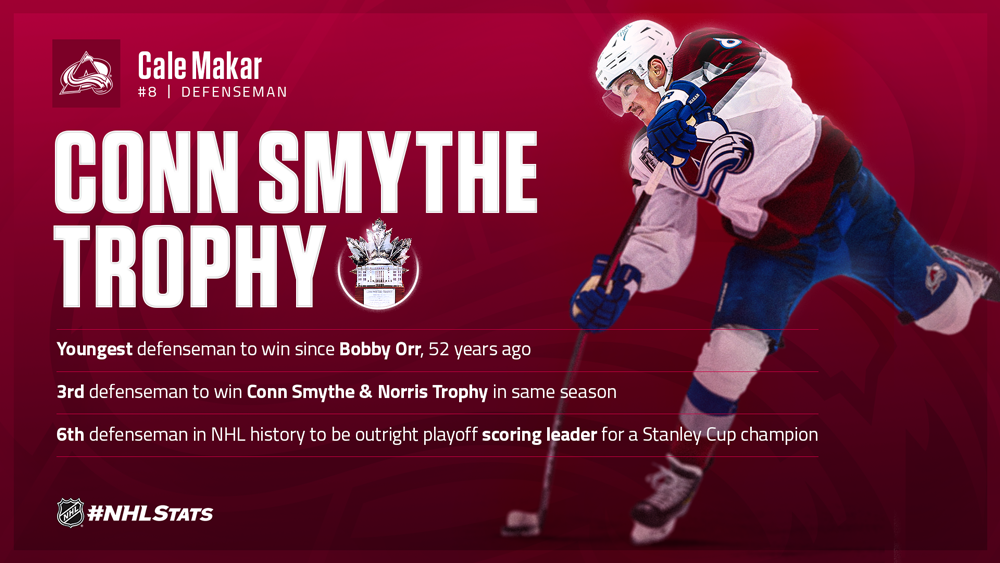 MAKAR DELIVERS ONE OF BEST PLAYOFF PERFORMANCES EVER BY A DEFENSEMAN
Cale Makar compiled 8-21—29, one game-winning goal (scored in overtime) and led all skaters with 27:04 TOI/GP across 20 games during Colorado’s Stanley Cup run.

* Makar became the sixth defenseman in NHL history – and first since Brian Leetch with the 1994 Rangers – to finish as the outright scoring leader for a Stanley Cup champion. In addition to Makar and Leetch, the others were Al MacInnis (1989 Flames), J.C. Tremblay (1966 Canadiens), Tim Horton (1962 Maple Leafs) and Pierre Pilote (1961 Black Hawks).

* In addition to setting franchise benchmarks for goals, assists and points by a defenseman in one playoff year, Makar set an Avalanche/Nordiques playoff record for assists in one year by any player.

* Makar’s point total was the second-highest in franchise history for one playoff year, behind only Joe Sakic (34 in 2001).

* Makar’s 21 assists trailed only Paul Coffey, Al MacInnis and Brian Leetch for the most in one postseason by a defenseman. That was aided by six multi-assist performances, one shy of Larry Robinson’s record for most in one playoff year by a blueliner (7 w/ 1978 Canadiens). His eight multi-point outings were two shy of tying the record for a defenseman, set by MacInnis (10 in 1989).

* Makar had at least three points five times in 2022, tied with Denis Potvin (5x w/ 1981 Islanders) for the second-most such performances by a defenseman in one playoff year behind Paul Coffey (6x w/ 1985 Oilers).

A ROUND-BY-ROUND LOOK AT MAKAR’S MVP PERFORMANCE
A closer look at some of Makar’s performances throughout his fourth Stanley Cup Playoffs appearance:

First Round vs. NSH (3-7—10 in 4 GP)
* Makar had 10 points in Colorado’s four-game sweep of Nashville, the most in NHL history by a blueliner through four games played in a postseason. It was the first time a defenseman had at least 10 points in any four-game Stanley Cup Playoffs series.

* Makar became the first defenseman in Avalanche/Nordiques franchise history with a double-digit point total in any playoff series and just the fourth active NHL defenseman to achieve the feat at the time.

Second Round vs. STL (0-3—3 in 6 GP)
* A quiet round by comparison, Makar notched his first point of the Second Round on a go-ahead goal by Nazem Kadri in the second period of Game 3. Colorado went on to win the game to break a 1-1 tie in the series, with Makar notching a point in each of the next two contests.

Conference Finals vs. EDM (2-7—9 in 4 GP)
*Makarmade history in Game 4 of the Western Conference Final by recording five points, an unprecedented performance by a defenseman in a potential series-clinching game and two shy of Wayne Gretzky’s NHL record for any skater in that situation. Makar also tied the franchise record for points by any player in any playoff game.

* Makar became the eighth different player in NHL history – and first in 35 years – to put his team into the Stanley Cup Final with a five-point showing.

Stanley Cup Final vs. TBL (3-4—7 in 6 GP)
* In Game 2, Makarbecame the second defenseman in NHL history to score both a shorthanded goal and power-play goal in the same Stanley Cup Final game. The only other instance was by Glen Wesley in the suspended game in 1988.

* Makar factored on five straight Avalanche goals from Game 2 to Game 4, the third defenseman in NHL history to factor on five or more consecutive team goals within a Stanley Cup Final, following Paul Coffey with the 1985 Oilers (6) and Eddie Bush with the 1942 Red Wings (6).

* Makar recorded 11 points in potential series-clinching games throughout the 2022 Stanley Cup Playoffs (3-8—11 in 6 GP), the most ever in a single postseason by a defenseman.

* Makar led an Avalanche blueline that set franchise playoff records for goals (18), assists (51) and points (69) by defensemen in one postseason. Colorado had the second-most points in one postseason (max. 4 rounds) in NHL history, behind only the 1985 Oilers (77).

MLS Next Pro Standings for Week 21