* The Stanley Cup was in the building for the first time during the 2022 Final, but Ondrej Palat potted the go-ahead goal with less than seven minutes remaining in regulation as the Lightning earned a crucial road win to force Game 6 in the championship series.

* Andrei Vasilevskiy vaulted Tampa Bay to another victory following a playoff loss, while Corey Perry picked up two assists to boost his career point total when facing elimination. Perry has helped his team evade elimination during the Final in each of the last three years (also Game 5 in 2020 w/ DAL & Game 4 in 2021 w/ MTL).

* The series shifts back to AMALIE Arena, with the hosts hoping to force the second Stanley Cup Final Game 7 in the last four years.

PALAT ADDS TO “CLUTCH PERFORMER” LORE WITH ANOTHER LATE WINNER

Ondrej Palat came through once again when his team needed him most as he scored his third go-ahead, game-winning goal of this postseason – all in the last seven minutes of the third period – to help the Lightning force Game 6 and keep their bid for a three-peat alive.

* Palat’s goal came at 13:38 of the third period, marking the 12th time a player scored a go-ahead, game-winning goal in the last 10 minutes of regulation with his team facing elimination in the Stanley Cup Final. His was the fourth-latest such tally in League history.

* Palat became the second player in NHL history to score at least three go-ahead, game-winning goals in the last 10 minutes of regulation in one postseason (also Game 3 and Game 5 of CF vs. NYR). The only other player to do so is his current counterpart – and the overtime hero from Game 4 – Nazem Kadri. During his first postseason with the Avalanche in 2020, Kadri netted late go-ahead winners in the Stanley Cup Qualifiers (vs. STL), First Round (Game 1) and Second Round (Game 3).

* Overall, Friday marked the 70th go-ahead goal of Palat’s NHL career (including 54 in the regular season) regardless of whether it stood as a winner. His 16 go-ahead goals in the playoffs rank second in franchise history behind Brayden Point (18).

* Already known as a clutch performer, Palat added to his playoff lore by matching a career high with his 11th goal this postseason and adding to an already career-best point total (11-9—20 in 22 GP).

LIGHTNING, VASILEVSKIY WIN YET ANOTHER CLOSE ONE TO STAVE OFF ELIMINATION

The Lightning became the second team in NHL history to win at least four consecutive games while facing elimination, all by a one-goal margin. Their other victories during this stretch came in Game 7 of the 2021 Stanley Cup Semifinals (1-0 W vs. NYI) and in the First Round this year against Toronto (4-3 OT W in Game 6, 2-1 W in Game 7). The only other club to accomplish that feat was the Blackhawks from 2013 to 2014 (also 4 GP).

* Overall, the Lightning improved to 14-10 all-time when facing elimination including a 3-0 mark in the 2022 Stanley Cup Playoffs.

* Tampa Bay owns a playoff record of 20-2 in the game immediately following a loss since falling to Philadelphia during the 2020 Stanley Cup Qualifiers. The Lightning have outscored opponents by a combined 81-44 margin in those contests.

* Andrei Vasilevskiy (35 saves) has manned the Tampa Bay crease in each postseason contest following a defeat dating to 2020, going 20-2 with a 1.83 goals-against average, .932 save percentage and five shutouts in those games. 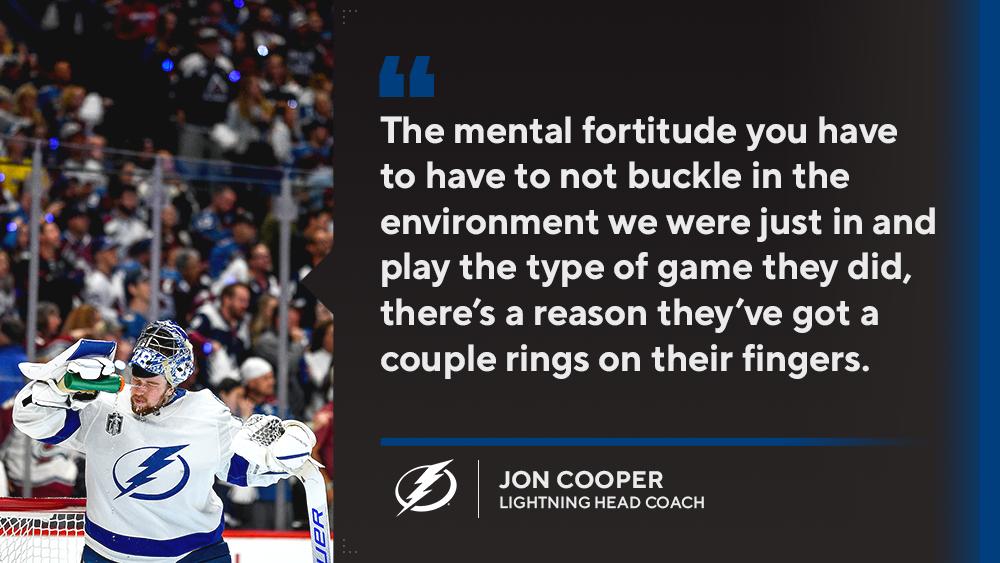 PERRY MAKES PRESENCE FELT IN PURSUIT OF ANOTHER CUP
The player with the most Stanley Cup Playoffs experience on the Lightning roster played a key role in keeping the club’s season alive as Corey Perry (0-2—2) factored on each of the team’s first two goals to help force Game 6 in Tampa on Sunday (8 p.m. ET on ABC, ESPN+, SN, CBC, TVAS).

* Perry, who is in the Final for a third straight year with a third different club, boosted his career totals when facing elimination to 10-7—17 in 27 such contests (15-12 record). 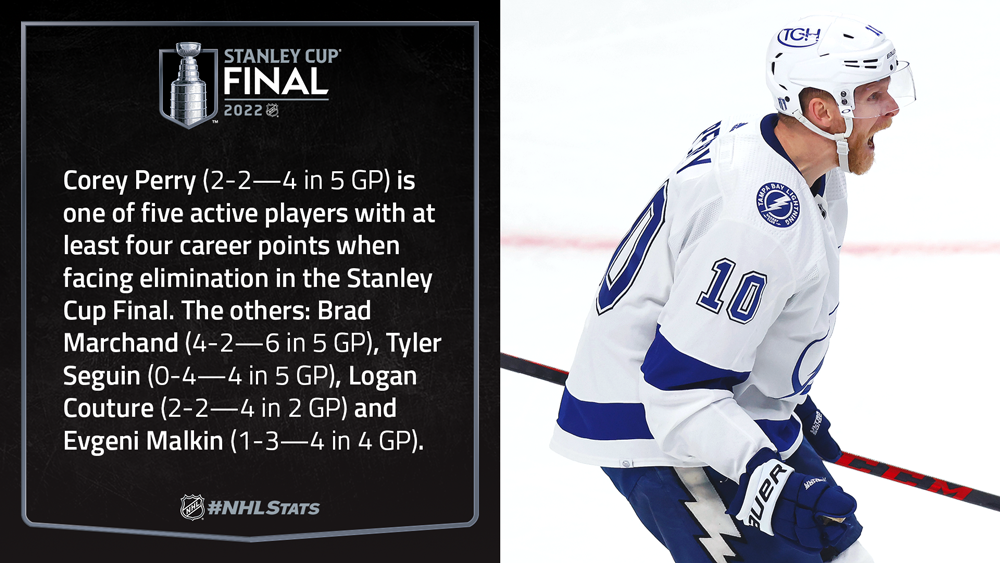 LIGHTNING HEAD HOME WITH A CHANCE TO FORCE GAME 7
For the 12th time in 15 years and 43rd time overall, the Stanley Cup Final will require at least six games – with the host Lightning looking to force the 18th Game 7 in Final history.

* The last team to trail 3-2 in the Stanley Cup Final and rally to win was the 2011 Bruins. Similar to what Tampa Bay is facing, they trailed 2-0 and later had to win Game 6 at home before taking Game 7 in Vancouver.

* The Lightning have trailed 3-2 in a Stanley Cup Final twice, winning in 2004 against the Flames and losing in 2015 versus the Blackhawks.

Crew picks up another point in 1-1 draw against tough Colorado, Saturday night

MLS Next Pro Standings for Week 21