Mega Sports News
7 minutes Stoppage Time here in the 2nd half. Got to kill the game here. 3-2 Crew over NYCFC.
View on Facebook

Mega Sports News
Luis Diaz is dishing out the assists tonight! Crew goes up 2-1 in the 27th minute on long shot in 18' off the left foot of Lucas Zelarayan. Team speed is the difference tonight as the Crew are dominating play so far.

Mega Sports News
The Crew responds in the 16th minute to tie 1-1! NYCFC having issues with speed of L.Diaz, Lucas and Cucho. Cucho scores inside the 18' right side. Diaz his 3rd assist. Diaz has really come along this season.

* With just three losses to date, the Avalanche can join elite company should they defeat the Lightning in Game 5 and capture the third Stanley Cup in franchise history.

* Nathan MacKinnon leads his teammates with 15 career points in potential series-clinching games. Only four players have recorded more points in that scenario since the Avalanche forward made his postseason debut in 2014.

* ABC’s broadcast of Game 4 between the Lightning and Avalanche was the most-viewed telecast of the day on Wednesday, with 4.6 million average viewers and 5.8 million peak viewers. Overall, the 2022 Stanley Cup Final is averaging 4.2 million viewers, up 67% from last year.

COLORADO ON CUSP OF CAPTURING THIRD STANLEY CUP
Colorado, one of nine teams in NHL history to average at least 4.50 goals-per-game in a single postseason (min. 10 GP), continues its journey toward dethroning the two-time defending Stanley Cup champions Friday and can claim the third championship in franchise history.

* The Avalanche enter the potential Cup-clinching game sporting a 15-3 record and can join elite company if they oust the Lightning in Game 5. Since 1987 when all rounds became best-of-seven, only one team has finished a postseason with fewer than four losses: the 1988 Oilers, who went 16-2 plus their no-decision in the suspended game during the Final (which was tied 3-3 when called), en route to their fourth championship in five years.

* Should they win the Stanley Cup, the Avalanche will tie the NHL record for most combined wins in one season, including playoffs.

* Nathan MacKinnon leads all players on Colorado’s active roster with eight goals and 15 points in potential series-clinching games, including a highlight-reel hat trick in Game 5 of the Second Round earlier this year. He is one of five Avalanche skaters with a double-digit career point total in that scenario (also Andre Burakovsky: 5-8—13, Cale Makar: 2-10—12, Mikko Rantanen: 5-6—11; & Gabriel Landeskog: 4-6—10).

* Since his postseason debut during the 2014 Stanley Cup Playoffs, which began with a three-assist outing against the Wild in Game 1 of the First Round, only three players have netted more goals in potential series-clinching contests than MacKinnon (8 G in 11 GP): Bryan Rust (10 G in 19 GP), Jake Guentzel (10 G in 13 GP) and Brock Nelson (9 G in 13 GP). 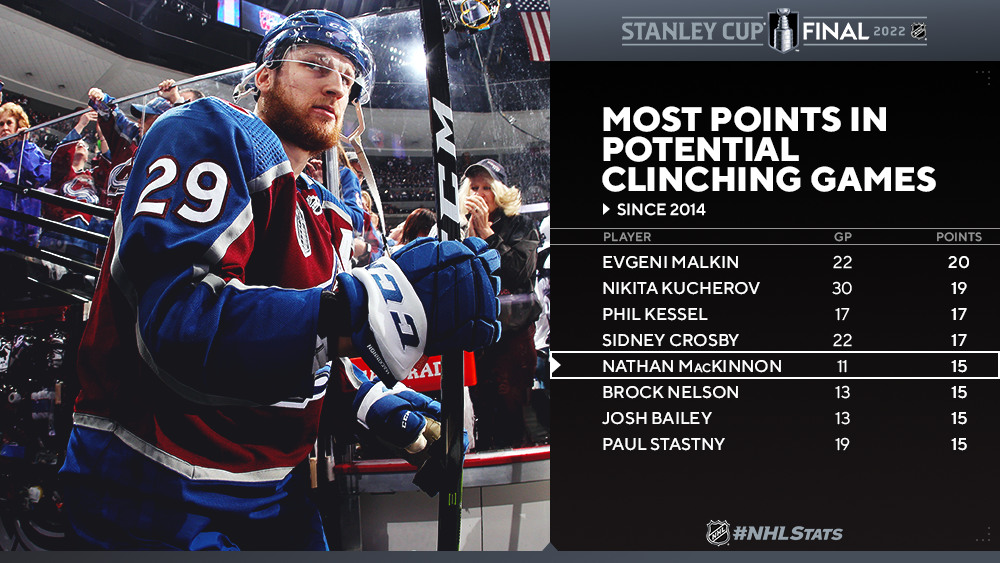 RESILIENT TAMPA BAY LOOKS TO STRIKE BACK IN GAME 5
The Lightning find themselves in a familiar situation, down by two games in a series for the third time in the past two rounds. In each of those instances, Tampa Bay has responded with a win, something the club will be looking to do once again Friday at Ball Arena with a chance to force a Game 6 on home ice.

* The Lightning will look to extend the Final to at least six games – something that has happened in 11 of the past 14 championship series from 2008 to 2021.

* In Game 5, the Lightning will face elimination for just the fourth time in 70 postseason games since the start of their 2020 championship run. Each of the previous three elimination contests in that span were decided by a one-goal margin, with Tampa Bay allowing one goal or fewer in two of those games.

* Steven Stamkos enters Friday with the highest points-per-game rate (min. 10 GP) on the active roster in contests when his team has faced elimination (0.63 P/GP), totaling 4-6—10 in 16 games. His team owns a 10-6 record in those contests.

* Corey Perry leads the Lightning’s active roster in both goals and points in contests when his team has faced elimination (10-5—15 in 26 GP). His experience (26 GP) and win total (14-12) sits second among current Lightning players behind Ryan McDonagh (18-9 in 27 GP).

The Chirp (6/21): Daren is joined by Ray Ferraro to talk about various Stanley Cup Final storylines