* Ross Colton scored the go-ahead goal with 3.8 seconds remaining in regulation as the two-time defending champions stunned the Panthers at FLA Live Arena.

* Jordan Binnington followed up his 51-save performance in Game 1 with 30 more Thursday to help the Blues snap the Avalanche’s winning streak at five contests.

COLTON SCORES LATE TO HELP LIGHTNING TAKE GAME 2
Less than a year after scoring the Stanley Cup-clinching goal for Tampa Bay in Game 5 of the 2021 Final, Ross Colton came up clutch once again by netting the tiebreaking goal with 3.8 seconds remaining in regulation to give his club a 2-1 victory and a 2-0 series lead.

* Colton’s marker was the seventh go-ahead goal in the final four seconds of regulation in Stanley Cup Playoffs history and second by a Lightning player. In Game 3 of the 2015 Second Round, Tyler Johnson gave Tampa Bay a 2-1 lead at 19:58 of the third period as the club pulled ahead 3-0 in its series against Montreal – part of the team’s run to the Stanley Cup Final.

* In addition to Colton and Johnson, the only other go-ahead goal by a Lightning player during the final minute of a postseason game came two years ago when Nikita Kucherov tallied at 19:51 of the third period in Game 2 of the Conference Finals against the Islanders – also to give the club a 2-0 series lead.

FAMILIAR FACES MAKE THE DIFFERENCE ONCE AGAIN FOR TAMPA BAY

* Kucherov factored on a game-winning goal during the Stanley Cup Playoffs for the 21st time in his NHL career (7-14—21). His 21 such points rank second among active players, behind only Sidney Crosby (9-16—25).

* Vasilevskiy improved to 55-32 through 90 career postseason appearances, including a 14-3 record in 19 games during the Second Round (1.91 GAA, .934 SV%, 1 SO). The Lightning goaltender has never suffered more than one loss in any Second Round series since his Stanley Cup Playoffs debut in 2015.

* The Lightning own a 2-0 series lead for the fourth time in their past six playoff series, as they seek a spot in the final four for the sixth time in eight seasons.

* Defending Stanley Cup champions are 68-3 all-time when going up 2-0 in a best-of-seven series – the only three teams in NHL history to pull off a comeback in that scenario were the Avalanche in the 1999 Conference Semifinals (vs. DET), the Penguins in the 2009 Stanley Cup Final (vs. DET) and the Hurricanes in the 2019 First Round (vs. WSH).

BINNINGTON STOPS 30 AND PERRON POTS TWO AS BLUES EVEN SERIES
Jordan Binnington followed up his 51-save effort in Game 1 by stopping 30 shots Thursday and David Perron (2-0—2) recorded his fourth career multi-goal playoff game with the Blues as St. Louis handed Colorado its first loss of the 2022 Stanley Cup Playoffs.

* Jordan Binnington turned aside 81 of 85 shots through the first two games in the Second Round as the Blues evened their series 1-1. He improved to 20-20 in 40 career playoff appearances – the only other goaltenders with as many postseason wins since 2019 (when Binnington debuted) are Andrei Vasilevskiy (40-21) and Tuukka Rask (22-16).

* Perron potted his team-leading sixth and seventh goals in the 2022 Stanley Cup Playoffs, tied for the most among remaining players (w/ Evander Kane). Perron’s four multi-goal games in the postseason with St. Louis trail only Brett Hull (13), Vladimir Tarasenko (9), Bernie Federko (7) and Brian Sutter (5) for the most in franchise history. 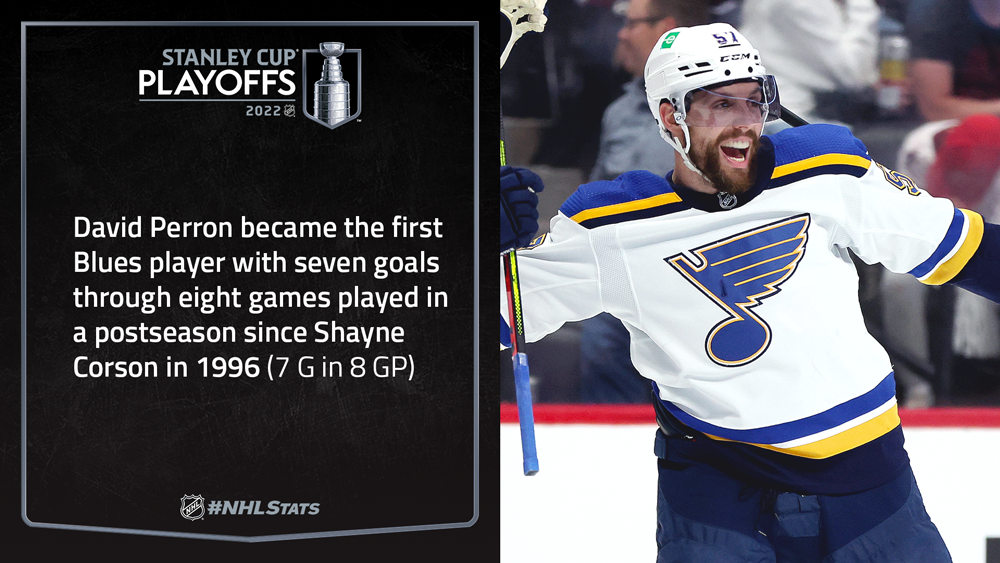 * #NHLStats: Live Updates for Thursday, May 19

The Hurricanes will look to take a 2-0 series lead – something they have done in four of their past seven matchups, including the 2020 Stanley Cup Qualifiers (vs. NYR) – while the Rangers eye a split before heading home for Game 3. In Calgary, the Flames will seek their first-ever 2-0 series lead against the Oilers following the highest-scoring playoff game in 29 years.

Carolina can extend its postseason-opening home winning streak to six contests when the Hurricanes and Rangers square off in Game 2 of their Second Round series at PNC Arena.

* Not only is a new franchise record within reach for the team, but Sebastian Aho (17-24—41) sits within striking distance of putting his name atop a few all-time lists. After providing the tying goal in Game 1, Aho now needs two goals and two points to tie Eric Staal for the franchise lead in both categories – and one goal to equal head coach Rod Brind’Amour for second place on that list. With his next assist, Aho will break a tie with Staal and match Ron Francis (25) for the franchise lead.

FLAMES, OILERS TO PLAY GAME 2 AFTER TAKING TIME MACHINE TO 1980s IN OPENER

After combining for 15 goals in the Second Round opener Wednesday, Calgary and Edmonton will square off at Scotiabank Saddledome once more before the series shifts up Alberta Highway 2 to Rogers Place.

* Four of the five highest-scoring series in Stanley Cup Playoffs history have involved at least one of the Flames or Oilers, including a previous “Battle of Alberta” where Calgary and Edmonton combined for 60 goals across seven games during the 1984 Division Finals. The Oilers went on to win their first Stanley Cup that year. 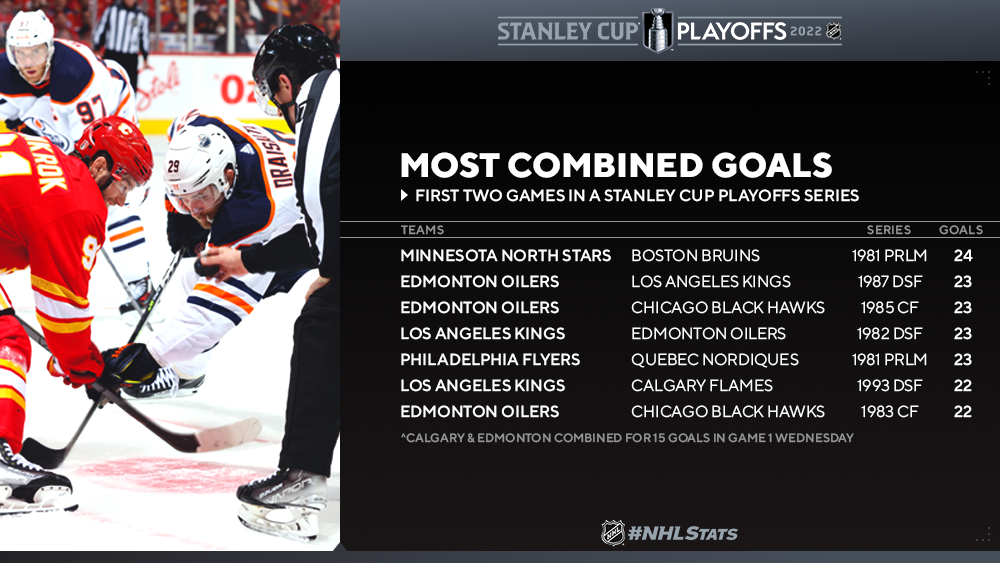 * After leading their teams in scoring Wednesday, Matthew Tkachuk (3-0—3; tied) and Connor McDavid (1-3—4) will look for more in Game 2. The most goals by a player in a series between Calgary and Edmonton is eight while the most points are 14, achieved by Mark Messier and Wayne Gretzky, respectively, in the 1983 Division Finals with the Oilers.