* The highest-scoring opening round in 27 years (6.4 G/GP) came to a close Sunday with the Rangers and Flames winning the fourth and fifth Game 7s of the 2022 First Round to advance.

* Artemi Panarin and Johnny Gaudreau – two of the top 12 scorers from the regular season – tallied in overtime Sunday. It was the second time in NHL history that multiple Game 7s required overtime on the same day – with the other instance coming 25 years ago.

* The 2022 Second Round will begin Tuesday with Game 1 between the Lightning and Panthers (7 p.m. ET) followed by the opener between the Blues and Avalanche (9:30 p.m. ET) – both on TNT, Sportsnet, TVAS and CBC. Click here for more on the schedule.

WEEKEND OF DRAMATIC GAME 7s LOCKS IN SECOND ROUND OF BRACKET

A weekend of Game 7s propelled five teams into the Second Round and locked in the second phase of the 2022 Stanley Cup Playoffs bracket.

* Six of the remaining clubs rallied from a series deficit to advance (CGY, EDM, FLA, NYR, STL & TBL) and accounted for more than half of the comeback wins during the First Round (10 of 19). That continued a trend from the regular season – six of the top eight teams in terms of comeback wins are still alive in the Stanley Cup Playoffs (FLA, 1st; NYR, 2nd; STL, t-3rd; TBL, t-3rd; COL, t-7th; & EDM, t-7th).

* Three series are rematches of recent playoff showdowns: the Avalanche and Blues met in 2021 (4-0 COL), as did the Lightning and Panthers (4-2 TBL), while the Hurricanes and Rangers had their only postseason series in the 2020 Stanley Cup Qualifiers (3-0 CAR). The Oilers-Flames reignites the “Battle of Alberta” for their first playoff matchup in 31 years.

* Two of the series won’t even see teams leave the province or state – just the fourth time that has happened in a single round in Stanley Cup Playoffs history.

* All four division champions from the regular season advanced – just the second time that has happened since the NHL reduced to four divisions in 2013-14 (also 2017-18).

After two weeks of “Mayhem” in the First Round that featured the third-most games in a round in NHL history (51), 14 elimination games, 19 comeback wins (37% of all contests), six teams erasing a series deficit to advance, the hockey world will take a day to collect its breath before dropping the puck on the Second Round of the 2022 Stanley Cup Playoffs.

* Click here or visit NHL.com schedule to view the Second Round schedule.

Twelve days after the “City That Never Sleeps” saw the First Round open with triple overtime, the series ended in a fitting fashion – with overtime in Game 7. After tying the game twice, the Rangers completed their third straight comeback win with a goal 4:46 into overtime to successfully overcome a 3-1 series deficit for the third time in franchise history (also 2014 R2 & 2015 R2). It was the 31st time in Stanley Cup Playoffs history that a team won a series in which it trailed 3-1.

* The Rangers, who advanced to the Second Round for the first time since 2017, became the first team in NHL history to win a series by claiming three consecutive comeback wins when facing elimination.

* Artemi Panarin became the third player in the Rangers’ storied history to score in overtime of a Game 7,following Derek Stepan (2015 R2 vs. WSH) and Stephane Matteau (1994 CF vs. NJD). Mika Zibanejad (1-2—3) tied the game in the third period and assisted on the overtime goal to equal the franchise record for most assists (8) and points (11) in a series.

* The Rangers and Hurricanes will meet in a best-of-seven series for the first time, following their best-of-five matchup during the 2020 Stanley Cup Qualifiers. Carolina earned a 3-0 sweep as Sebastian Aho led the way with 3-5—8 and Andrei Svechnikov notched a hat trick in Game 2 – in what ended up being Henrik Lundqvist’s last game in a Rangers uniform.

Johnny Gaudreau (1-1—2) scored at 15:09 of overtime to ignite the “C” of Red as thousands of fans inside Scotiabank Saddledome and outside in the Red Lot were brought to their feet with the club’s first Game 7 victory on home ice in 33 years (which also came in overtime: 1989 DSF vs. VAN). Gaudreau’s first career playoff overtime goal was assisted by fellow 100-point man Matthew Tkachuk, who notched the tying goal in the second period, and put Calgary into the Second Round for the first time since 2015.

* Gaudreau became the third player in Flames history to score in overtime of a Game 7, joining Joel Otto (1989 DSF vs. VAN) and Martin Gelinas (2004 CQF vs. VAN). Meanwhile, Darryl Sutter improved to 5-0 in his past five Game 7s and claimed his eighth career Game 7 victory – the most among all head coaches and tied for the most in NHL history (including head coaches, skaters and goaltenders).

* The 2022 Stanley Cup Playoffs will mark the sixth postseason edition of the ‘Battle of Alberta’ and first in 31 years. In the last rendition during the 1991 Division Semifinals, the series went the distance and ended with an Esa Tikkanen overtime goal against Mike Vernon in Game 7 at Olympic Saddledome. The only two franchises from the same state or province to have contested as many playoff series against each other are Pittsburgh and Philadelphia (7) and the NY Rangers and NY Islanders (7).

The Game 7 spotlight shone directly on Dallas’ Jake Oettinger (64 saves) and New York’s Igor Shesterkin (39 saves) in their first appearance in a winner-take-all showdown during the Stanley Cup Playoffs:

* Oettinger became the second goaltender to record at least 60 saves in a Game 7, following the Islanders’ Kelly Hrudey (73 saves in 1987 DSF at WSH), while Shesterkin, a 2021-22 Vezina Trophy finalist, trails only Ed Giacomin (42 saves in 1974 SF) for the most saves by a Rangers goaltender in a Game 7. Both notes are since 1955-56 when shots on goal were officially tracked.

* Hours after Shesterkin finished with the highest single-series save total by an NHL goaltender in 13 years, Oettinger outdid him to climb into third place on that list. 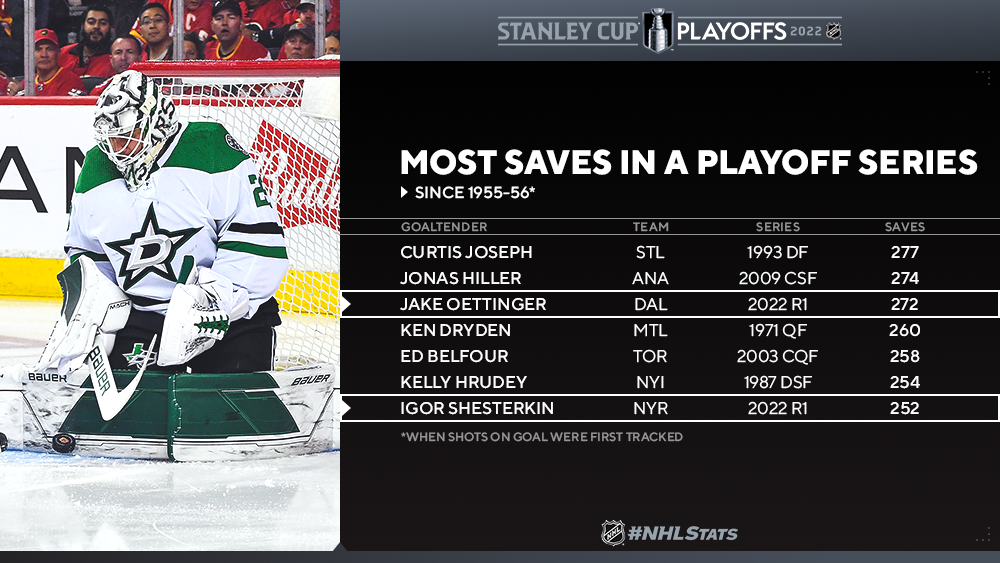