* Four-time scoring champion Connor McDavid had two points across more than 27 minutes of ice time in Game 7 to match the highest opening-round point total in 29 years (14 points) and lift Edmonton into the Second Round for the first time since 2017.

* Carolina’s Max Domi and Tampa Bay’s Nicholas Paul played the role of “unlikely hero” in Game 7 by each scoring their first two career playoff goals in winning efforts – both factoring on all of their team’s goals.

* The three Game 7s were tied or within one goal for 81% of playing time during a tripleheader Saturday, including all of the Lightning-Maple Leafs matchup.

* If you thought Saturday was fun, get ready for two more Game 7s on Sunday with the Penguins-Rangers and Stars-Flames contesting winner-take-all showdowns to conclude the 2022 First Round.

* A series trend continued Saturday as the Hurricanes claimed their fourth victory on home ice against the Bruins in the 11th seven-game series in Stanley Cup Playoffs history to have the home team win each contest (a look at the 10 prior instances).It was Carolina’s sixth straight Game 7 victory dating to the 2006 Conference Finals, equaling the longest such winning streak in NHL history and guiding the club into the Second Round for the third time in four years.

* Andrei Vasilevskiy made 30 saves to earn his 11th career series-clinching win – the second most among active goaltenders behind Marc-Andre Fleury (16) – as the Lightning posted their ninth consecutive series victory dating to the 2020 First Round. The 2021 Conn Smythe Trophy recipient, who leads all netminders in wins since making his playoff debut in 2015 (53), has allowed one goal or less in nine of those series-clinching wins, including five shutouts.

* Mike Smith made 29 saves to record a shutout in his Game 7 debut and Cody Ceci became the fourth defensemen in franchise history to score a series-clinching goal (in any contest) as the Oilers advanced with a home-ice win for the first time since the 2006 Conference Semifinals (vs. SJS). At age 40 years, 52 days, Smith became the oldest goaltender in NHL history to record a shutout in his Game 7 debut – the only other netminder age 40-plus to win a Game 7 is Dwayne Roloson (41 years, 197 days), who did so via a 1-0 victory in the 2011 Conference Quarterfinals with Tampa Bay – when Smith was his backup.

* Saturday marked the sixth multi-point game of the 2022 First Round for the Oilers captain, matching Rick Middleton (6x in 1983 DF w/ BOS) for the most in a single playoff series in NHL history.

* McDavid’s 14 points equal the highest total in an opening round over the past 29 years and are a number exceeded only twice in the first round in League history – once by Mario Lemieux and once by Wayne Gretzky. 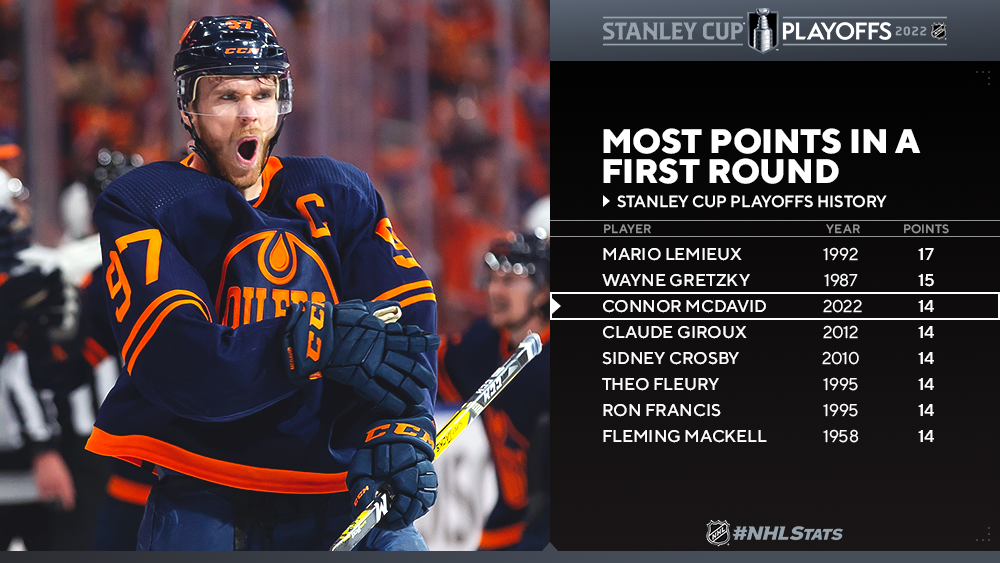 ONE MORE SERIES SET, TWO STILL UP IN THE AIR LEADING INTO GAME 7 DOUBLEHEADER

Half of the matchups for the Second Round will be decided Sunday after only one was locked in from the Game 7 results on Saturday. After 26 seasons in the NHL together without a head-to-head playoff meeting, the Lightning and Panthers will clash in the Stanley Cup Playoffs for a second straight year.

* Tampa Bay and Florida combined for 41 goals in their six-game showdown in the 2021 First Round – including 32 through four contests – with Nikita Kucherov (3-8—11 in 6 GP) and Jonathan Huberdeau (2-8—10 in 6 GP) finishing as the top two scorers in the series. The matchup between the “Sunshine State” rivals marks the seventh time in NHL history that two teams from the same state or province will face each other in the playoffs in consecutive years – the last occurrence was when the Sharks and Kings met in 2013 and 2014.

* The Hurricanes will face either the Rangers or Penguins. Carolina has had one postseason series against each club, both since relocating in 1997-98. The Hurricanes were swept 4-0 by the Penguins in the 2009 Conference Finals and defeated the Rangers in a 3-0 sweep during a best-of-five series in the 2020 Stanley Cup Qualifiers.

DEADLINE PICKUPS PAY DIVIDENDS IN GAME 7
Two players acquired in the hours leading up to the 2022 NHL Trade Deadline factored on all of their team’s goals Saturday as Carolina’s Max Domi (2-1—3) and Tampa Bay’s Nicholas Paul (2-0—2) each lifted their club into the Second Round by setting and/or matching franchise benchmarks for goals and points in a Game 7. Domi and Paul each scored the first goals of their postseason career.

* Paul, who played minor hockey in Mississauga, Ont., and began his junior career with the Brampton Battalion in the Greater Toronto Area, became the second straight Ontario-born player to score a series clinching goal against Toronto (joining current teammate Corey Perry: 2021 R1 w/ MTL). Paul is skating in the Stanley Cup Playoffs for the first time in eight NHL seasons. A fourth-round pick by Dallas in the 2013 NHL Draft, Paul was traded to the Senators in 2014 in a deal that sent Jason Spezza – his opponent Saturday – to the Stars. 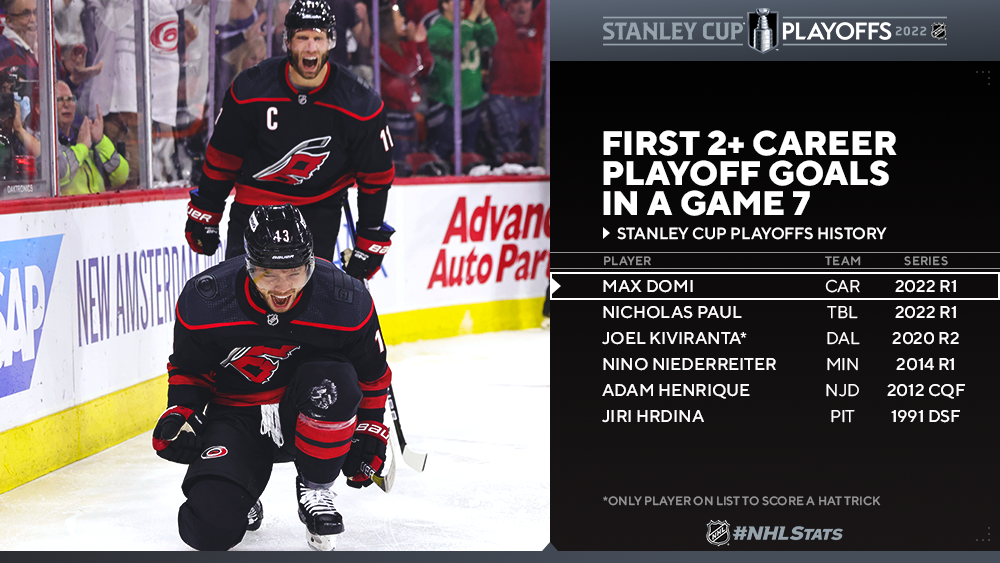 FIRST ROUND TO CULMINATE WITH GAME 7 DOUBLEHEADER
For the fourth time in NHL history and first in 11 years, multiple Game 7s will be played on consecutive days, with the Penguins, Rangers, Flames and Stars all vying for two remaining spots in the 2022 Second Round. 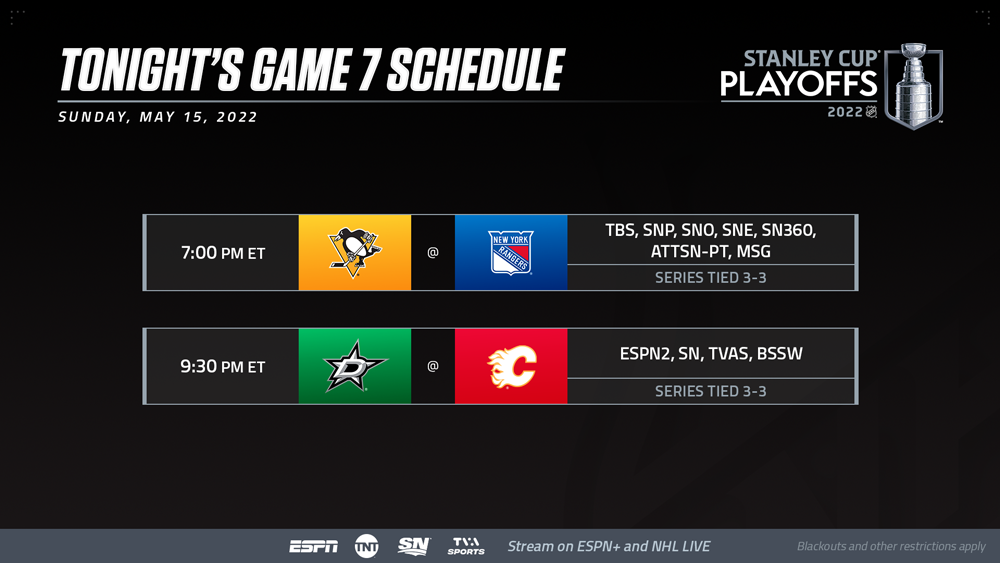 PENGUINS-RANGERS SERIES SHIFTS BACK TO BROADWAY FOR FINAL ACT
The drama of a Game 7 heads to Broadway as the Penguins and Rangers contest their First Round finale, with the hosts looking to win a series after facing a 3-1 deficit for the third time in franchise history and the visitors looking to stay perfect in Game 7s on the road (6-0). 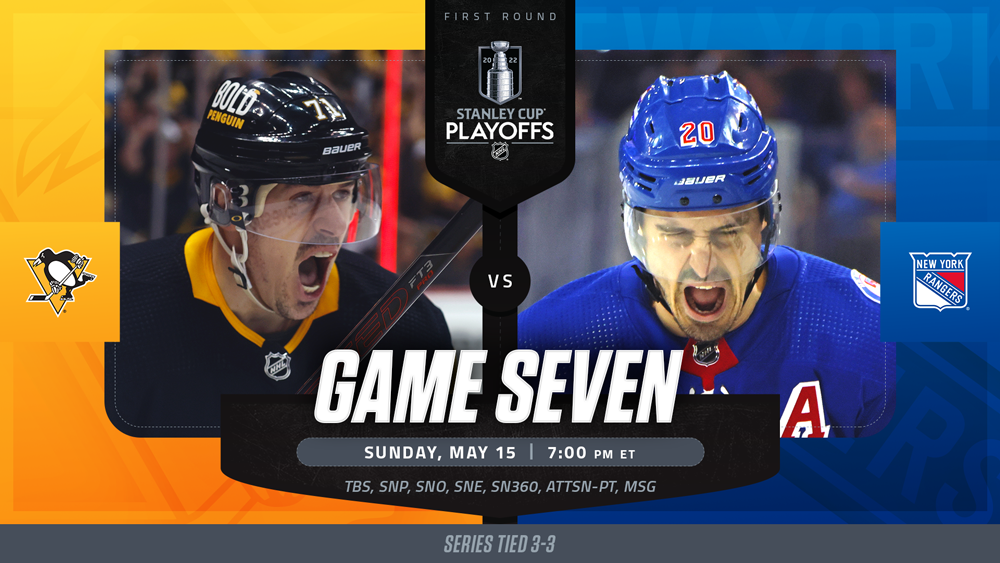 * The first time New York overcame a 3-1 series deficit to advance was in the 2014 Second Round against Pittsburgh, when they rallied behind Martin St. Louis following the passing of his mother en route to the Stanley Cup Final. One year later, the Rangers posted three straight victories again while facing elimination to defeat Washington in the 2015 Second Round.

* Pittsburgh will play in its 18th all-time Game 7 and equal St. Louis for the most among non-Original Six clubs. The Penguins are 10-7 in the their 17 previous Game 7s, including a 6-0 road record – they are the only NHL club without a Game 7 defeat as a visitor (min. 2 GP) and own the longest Game 7 road winning streak in League history. Pittsburgh will look to become the second visiting team in NHL history to win a Game 7 at Madison Square Garden (after TBL in 2015 CF), where New York has claimed seven of their nine Game 7 victories (NYR: 9-6 overall, 7-1 at home).

“C OF RED” SET TO WITNESS STARS-FLAMES SERIES FINALE
The last contest of the 2022 First Round features the Stars and Flames as the “C of Red” will witness a Game 7 at Scotiabank Saddledome for the first time in 16 years. The last Game 7 wins for both Dallas (2020 R2) and Calgary (2004 CQF) came en route to the Stanley Cup Final.

* The Stars/North Stars franchise is 6-8 in Game 7s, including a 3-4 record since moving to Dallas. The Flames are 5-7 all-time in Game 7s, with all 12 being contested since the club relocated from Atlanta. 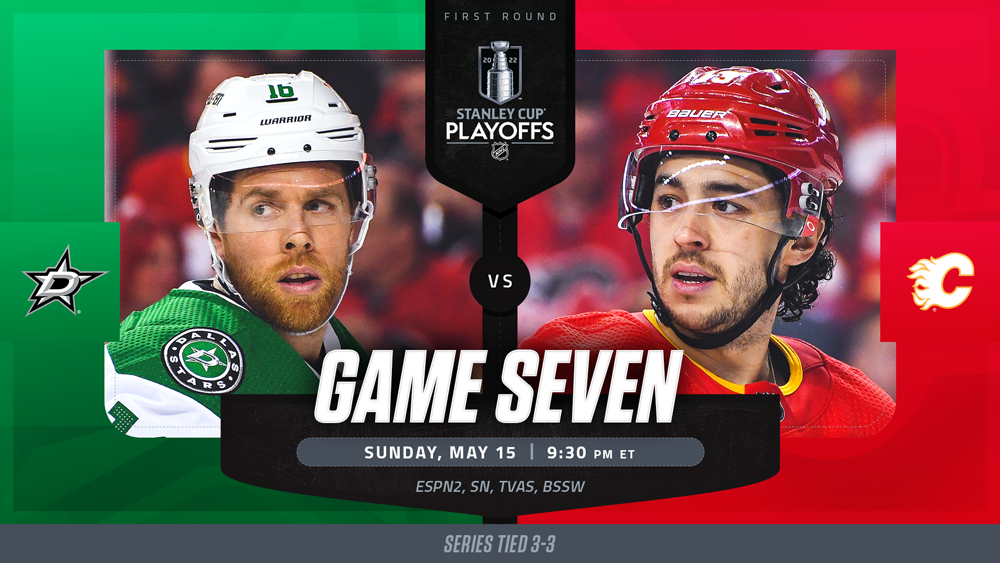