* The three remaining playoff spots in the Western Conference could be claimed Tuesday, with the outcome of the Stars-Golden Knights game impacting a number of clinching scenarios.

* The NHL could see a first-time Presidents’ Trophy winner by the end of Tuesday’s slate as the Eastern Conference-leading Panthers aim for the League’s top seed.

* After a visit to the White House on Monday, the Lightning could know their First Round opponent by the end of the night, while the fourth and final division crown of 2021-22 could be handed out on Broadway.

HEAD-TO-HEADS WITH CLINCHING IN THE CARDS

There’s a long list of clinch scenarios on the docket, including these ones rooted in head-to-head matchups on Tuesday’s schedule:

* A victory in regulation would put the Stars (44-30-5, 93 points) into the 2022 Stanley Cup Playoffs when they host the Golden Knights (42-31-6, 90 points). Vegas, meanwhile, will need at least a point to stay in the hunt for a fifth consecutive postseason berth since entering the NHL.

* The Metropolitan Division title will be at stake when the Hurricanes (52-20-8, 112 points) visit the Rangers (51-22-6, 108 points) on Broadway. Carolina needs a win of any kind to wrap up the No. 1 seed in its division for the second straight season and sixth time in franchise history – they would also set a new club benchmark for wins and points in a season (currently tied in each category).

* The Predators (44-29-6, 94 points) can control their own fate Tuesday as they seek an eighth straight postseason berth – a regulation win against the Flames (49-20-10, 108 points) is one of five scenarios by which Nashville could clinch. The regular-season finale between the two clubs may not be the last they see of each other in 2021-22, as they are currently destined for a First-Round matchup – which would be the first-ever between the franchises. Nashville has defeated Calgary in both previous meetings this season, claiming an overtime win Nov. 2 and shootout victory April 19. 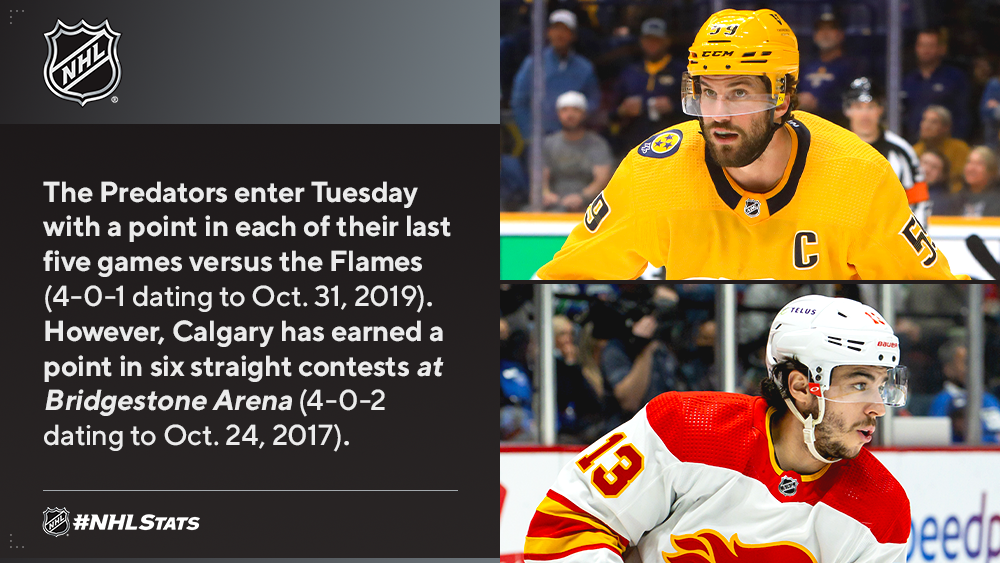 PRESIDENTS’ TROPHY AMONG TUESDAY’S STORYLINES WITHIN THE ATLANTIC

* Florida will secure its first Presidents’ Trophy on Tuesday if they defeat Boston in any fashion AND St. Louis defeats Colorado in any fashion. Another avenue for the Panthers would be to secure one point against the Bruins AND have the Blues defeat the Avalanche in regulation.

* Others in the Atlantic Division could settle their First-Round fate Tuesday as the Maple Leafs (52-21-7, 111 points) and Lightning (49-22-8, 106 points) hit the ice. Toronto will clinch the No. 2 seed in the division if they get at least one point against Detroit OR if Columbus defeats Tampa Bay in any fashion.

* A first-ever playoff series between Toronto and Tampa Bay could be confirmed Tuesday, if Tampa Bay wins in any fashion AND Florida wins in regulation.

TWENTY-SIX TEAMS, 13 GAMES, ONE TUESDAY NIGHT
A number of #NHLStats to watch out for Tuesday with 26 teams in action across a 13-game slate:

* Nikita Kucherov (23-39—62 in 44 GP) enters Tuesday with the NHL’s longest active goal streak at six games (8-8—16), one shy of his career high; there have only been three longer runs in franchise history. The Lightning, who have outscored opponents 22-7 over the course of three straight wins, have tallied at least six goals in three straight games for the second time in franchise history (also 3 GP from Dec. 22-29, 2018) and can join the Maple Leafs (5 GP from March 29 – April 5, 2022) as the second team to score six-plus in four or more consecutive contests this season.

* Robert Thomas, who is currently tied with Connor McDavid for the longest point streak by a player this season, will put his 17-game run on the line Tuesday. As a team, St. Louis owns an active 16-game point streak (a franchise record) and a seven-game road win streak – its third longest in franchise history. With two games remaining in 2021-22, Thomas could become the fourth player in NHL history with at least one point in each of his team’s final 19+ games in a regular season –only Wayne Gretzky (28 GP in 1984-85), Guy Lafleur (28 GP in 1976-77) and Adam Oates (21 GP in 1992-93) have done so. 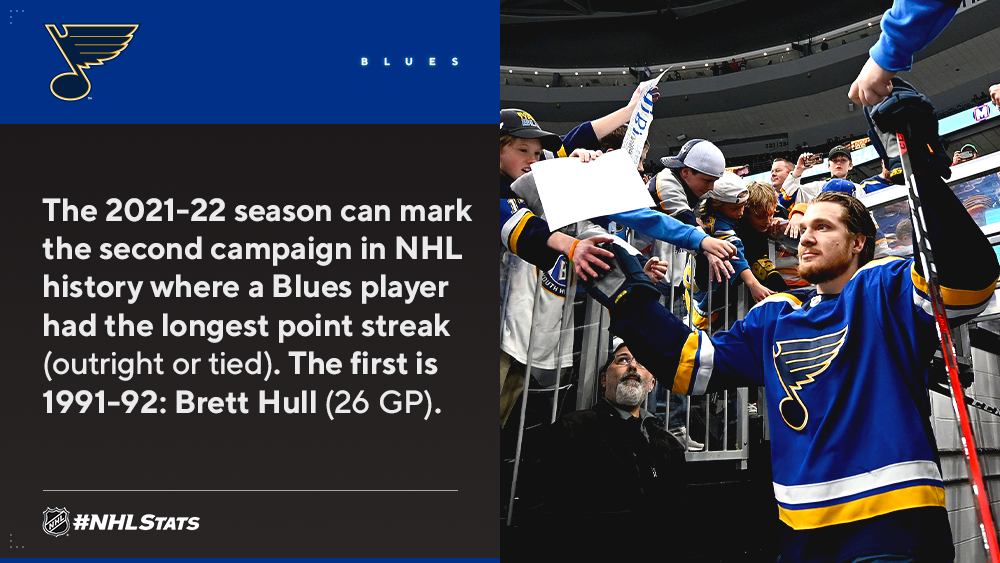 LIGHTNING GET SURPRISE VISIT TO OVAL OFFICE DURING TRIP TO WHITE HOUSE
The Lightning partook in their first-ever visit to the White House as they were honored for their 2020 and 2021 Stanley Cup wins with a reception before a ceremony with President Joe Bidenon the White House’s South Lawn. After the ceremony, President Biden surprised the Lightning by inviting them into the Oval Office.