* With the Avalanche and Blackhawks going head-to-head on a national broadcast, Cale Makar took over the spotlight in overtime and wowed the United Center crowd with an impressive individual effort.

* The Panthers continued their recent display of offensive prowess and scored 20 goals over a span of three games for the first time in franchise history (excluding shootout-deciding goals).

* Troy Terry scored his first career hat trick to reach the 20-goal mark in 2021-22. It marks the NHL’s 36th three-goal performance of the season and fourth through four days of 2022.

After the Blackhawks and Avalanche traded leads in regulation on ESPN+ and TVAS, Cale Makar converted a highlight-reel solo effort in overtime to record his 11th game-winning goal since making his regular-season debut in 2019-20 – the most among all defensemen over that span and three more than the next closest (John Carlson: 8).

PANTHERS CAP HOMESTAND WITH ANOTHER HIGH-SCORING AFFAIR
Patric Hornqvist(2-0—2), Brandon Montour (0-3—3) and Carter Verhaeghe (0-2—2)all collected multiple points as the Panthers (22-7-4, 48 points) earned their fourth straight win and kept pace with the Lightning (22-8-5, 49 points) atop the NHL standings.

* After a nine-goal outburst on Dec. 30, 2021 against Tampa Bay and a 5-2 win on Jan. 1 versus Montreal, Florida scored 20 goals across a three-game span for the first time in franchise history (excluding shootout-deciding goals). 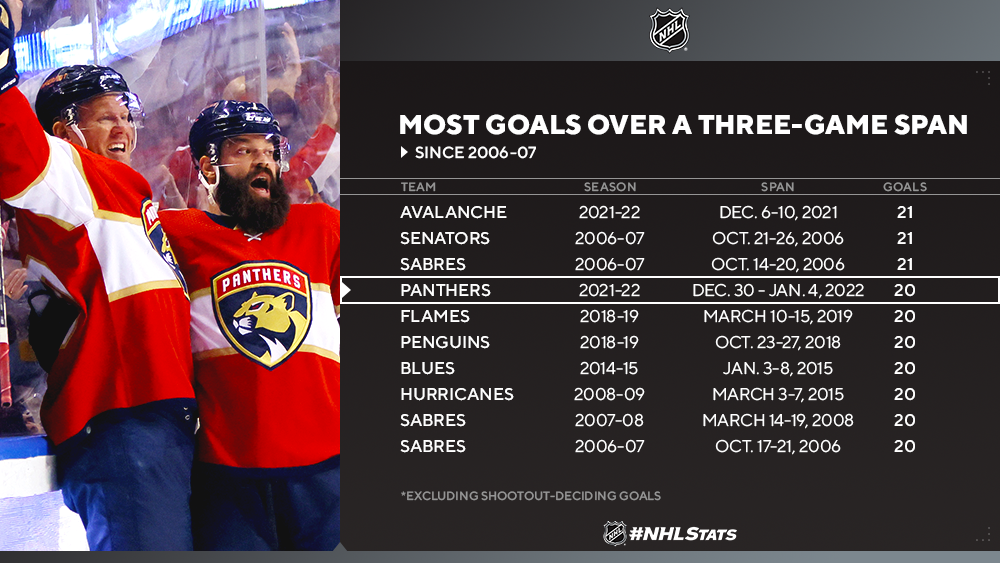 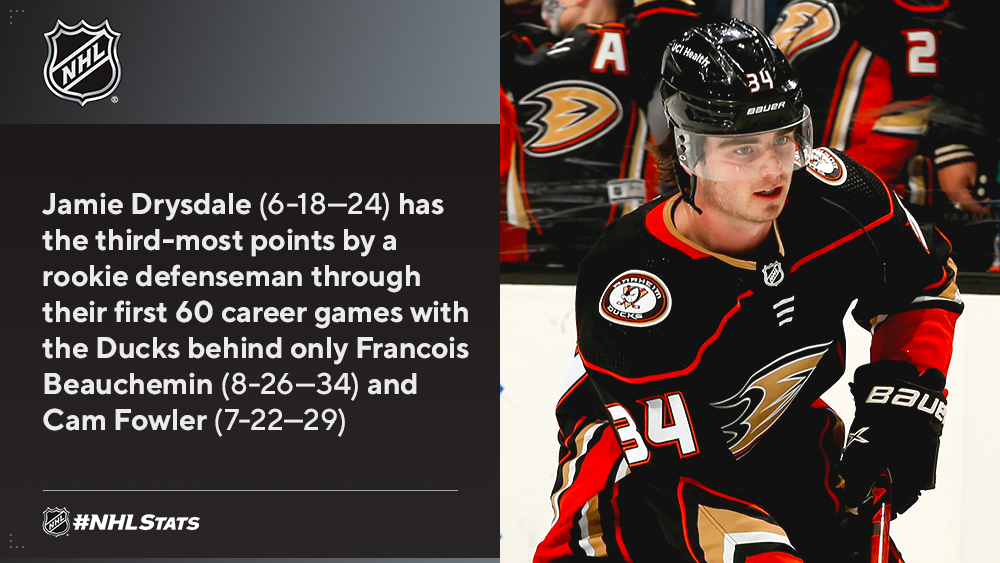 COYOTES SPANISH RADIO BROADCAST A FRANCHISE FIRST
Tuesday’s Jets-Coyotes game was broadcast on radio in Spanish with Luis Hernandez calling the action. It was the first of 13 “Game of the Week” Coyotes home radio broadcasts in Spanish this year – part of an agreement with Univision Arizona (KHOV 105.1 FM). Hernandez, who is also the Spanish voice of the NFL’s Arizona Cardinals, will not only be calling the games, but he will also be part of the team’s outreach to schools and Hispanic owned businesses focused on exposing Latinos young and old to the sport. 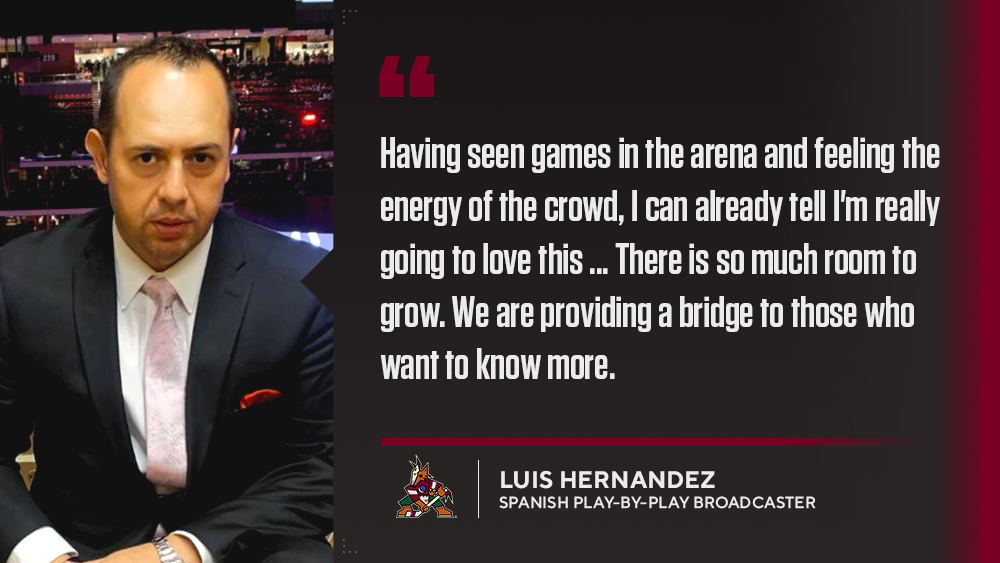 GOALS GALORE IN #NHLSTATS: LIVE UPDATES
Tuesday saw a trio of teams score six or more goals in their wins, including the NHL-leading Lightning and Red Wings. Click here for more notes from the Jan. 4 edition of #NHLStats: Live Updates. 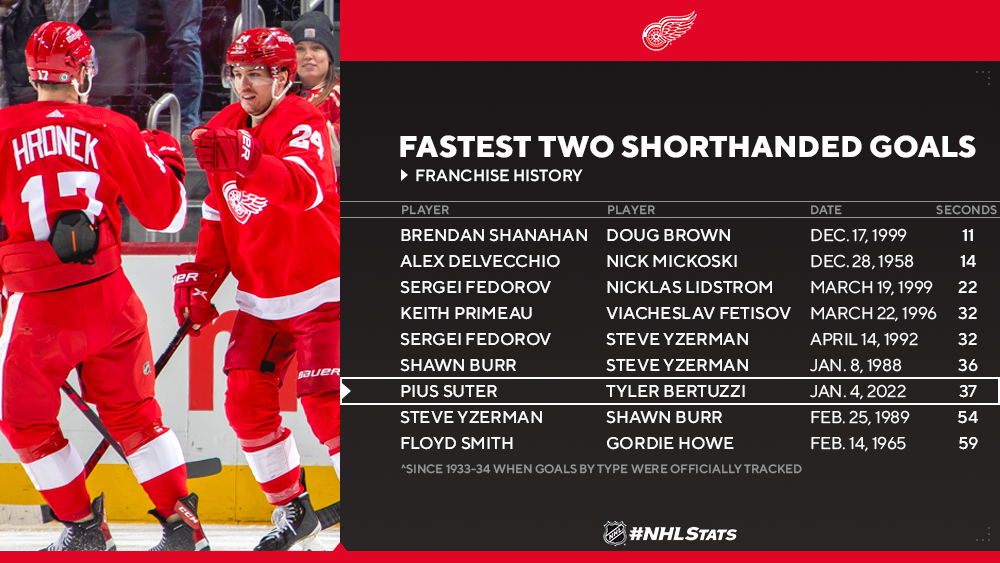 * Kraken ‘sticking to the plan’ after slow start, GM says

WEDNESDAY FEATURES NATIONAL BROADCAST IN CANADA, UNITED STATES
A two-game slate Wednesday will see Zach Hyman return to Toronto for the first time when the Oilers (18-13-2, 38 points) visit the Maple Leafs (21-8-2, 44 points) on Sportsnet and TVA Sports, while two of the hottest teams square off on NHL on TNT when the Penguins (18-8-5, 41 points) put their eight-game win streak on the line against the Blues (19-9-5, 43 points), who are coming off a victory at the 2022 Discover NHL Winter Classic and own a 7-1-2 mark in their last 10 contests overall. 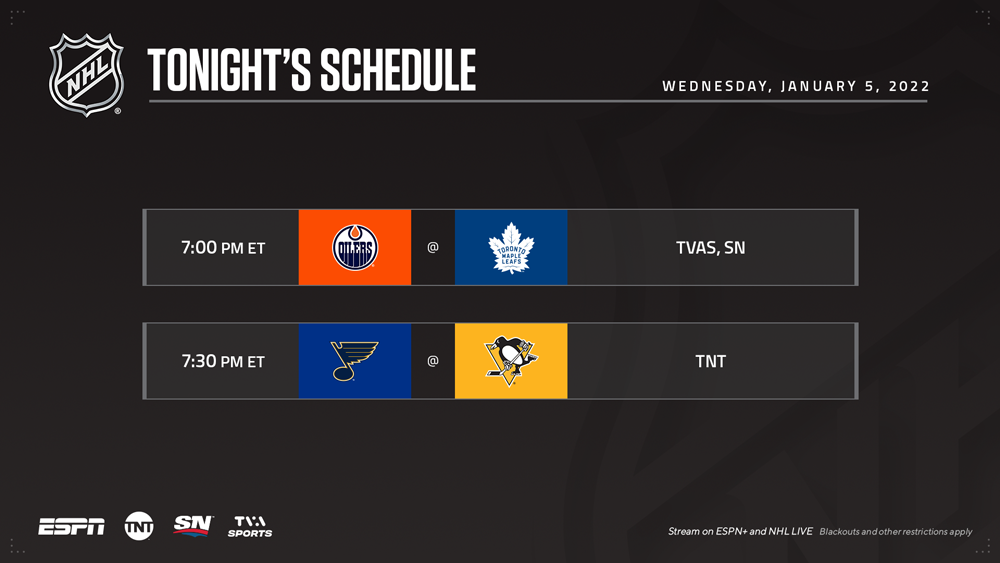 Cleveland Cavaliers News: Announces Class of 2022 Inductees for the Cavaliers Wall of Honor

Kadin Chung trying to make an impact with Toronto FC

Dayton Flyers rally to get past scrappy UMass in Atlantic 10 Quarterfinals, 75-72

Pittsburgh Panthers to play in 2022 Legends Classic with Arizona State, Michigan and VCU

Tom Crean runs out his welcome; Georgia announces he will not return for a 5th season as Men’s basketball coach

#23 Ohio State hosts Michigan on Senior Day this afternoon at 12:30